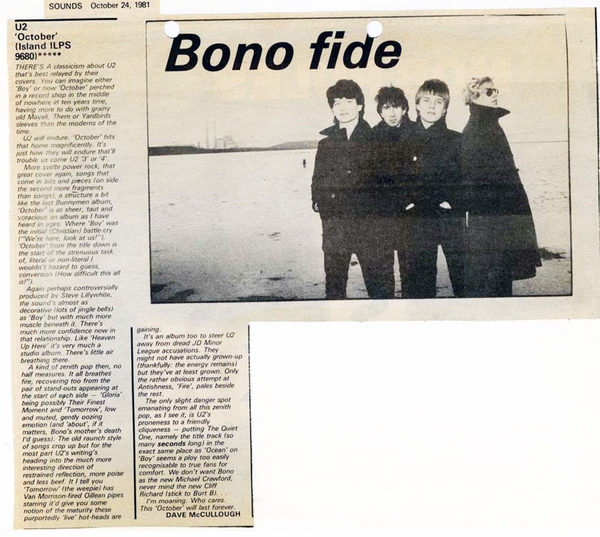 share
U2 will endure. October hits that home magnificently. It's just how they will endure that'll trouble us come U2 '3' or '4'...

There's a classicism about U2's best relayed by their covers. You can imagine either 'Boy' or now 'October' perched in a record shop in the middle of nowhere in ten years time, having more to do with grainy old Mayall, Them or Yardbirds sleeves than the moderns of the time.

U2 will endure. 'October' hits that home magnificently. It's just how they will endure that'll trouble us come U2 '3' or '4'.

More svelte power rock, that great cover again, songs that come in bits and pieces (on side the second more fragments than songs), a structure a bit like the last Bunnymen album, 'October' is as sheer, taut and voracious an album as I have heard in ages. Where 'Boy' was the initial (Christian) battle-cry ("We're here, look at us!"), 'October from the title down is the start of the strenuous task of, literal or non-literal I wouldn't hazard a guess, conversion (How difficult this all is!").

Again perhaps controversially produced by Steve Lillywhite, the sounds' almost as decorative (lots of jingle bells) as 'Boy' but with much more muscle beneath it. There's much more confidence now in that relationship. Like 'Heaven Up Here' it's very much a studio album. There's little air breathing there.

A kind of zenith pop then, no half measures. It all breathes fire, recovering too from the pair of stand-outs appearing at the start of each side -- 'Gloria' being possibly Their Finest Moment and 'Tomorrow', low and muted, gently oozing emotion (and 'about', if it matters, Bono's mother's death I'd guess). The old raunch style of song crop up but for the most part U2's writing's heading into the much more interesting direction of restrained reflection, more poise and less beef. It I tell you 'Tomorrow' (the weepie) has Van Morrison-fired Oillean pipes starring it'd give you some notion of the maturity these purportedly 'live' hot-heads are gaining.

I'm moaning. Who cares. This 'October' will last forever.
(condensed from original review)

'One of the greatest music men…'