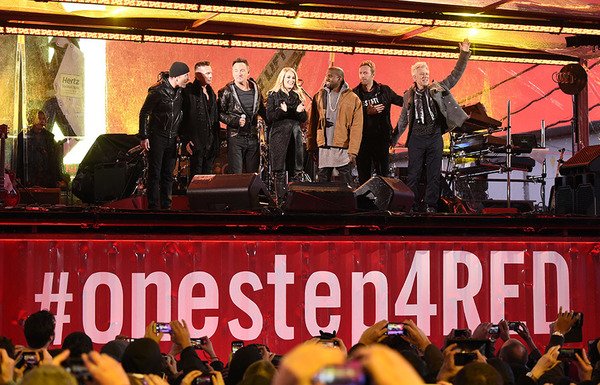 Introducing the surprise show President Clinton read an email Bono had sent him earlier in the day: 'Twenty-six years ago it wouldn't have been possible to have a concert in Times Square on World AIDS Day because to be diagnosed with AIDS was a death sentence. A few years ago when Secretary of State Clinton said that we could end AIDS, a lot of people didn't believe it. But this year, for the first time ever, more people were put on life-saving medicine than were diagnosed with AIDS. We are going to win this fight.'

As reported earlier, Bono, recuperating from his recent accident, couldn't be with the band for the (RED) Thank You presented by Bank of America ...  but some pretty special friends had agreed to step in.

'It's my great honour to introduce, with their special guest Chris Martin, one of the greatest bands in the history of rock music, my friends U2...'

Wearing a t-shirt with the slogan 'SUBSTITU2', Chris was right at home singing with U2 Minus 1.
'They kicked things off with "Beautiful Day", ' reported Rolling Stone. 'And the Coldplay frontman poured himself into the task, clearly thrilled to be filling the shoes of one of his biggest influences. "Dreams come true," he said, "for young and old people alike." They wrapped up with a powerful "With or Without You," and anyone who closed their eyes could have easily believed it was Bono there in Times Square.'

Edge stayed on stage to introduce a strong set from 'the reigning Queen of Country' Carrie Underwood before Adam and Larry were back to welcome 'the most groundbreaking artist in music today'.  Kanye West was a forcefield, delivering a powerful eight minute medley of 'Power,' 'Jesus Walks,' 'Black Skinhead,' 'Stronger' and 'Touch the Sky.'

To close the evening U2 Minus 1 were back on stage and breaking into the familiar opening bars of 'Streets'... with The Boss himself,  before closing the night with 'I Still Haven't Found What I'm Looking For.'
'I want to send this one out To Bono in Ireland,' he said, 'Be well my friend'.

Here's how Hot Press reported it. 'Bruce Springsteen took on the lead singer's role, as U2 powered into a superb version of 'Where The Streets Have No Name'. Finally, there was time for an emotional 'Still Haven't Found What I'm Looking For' with Bruce delivering a wonderfully soulful rendition backed by an enthusiastically, vocal crowd. There was a final Irish twist too, with the Boss throwing in a reference to Hozier's 'Take Me To Church...'

Were you in Times Square for the show? Or did you catch it online?  Add your reviews in the comments below.