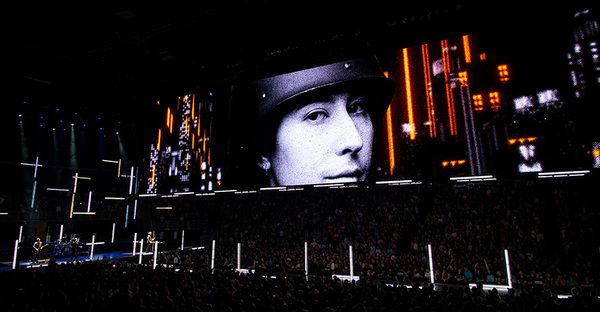 When & Where
Wednesday June 6th 2018, night two at the Bell Centre, Montreal. Show 15 and final Canadian show for U2eiTour.

Set List
A welcome return for All Because Of You, replacing Gloria in spot 5 on the setlist. It's last outing was back at the LA Forum in May. Here's the set list.

On The Socials
@MarieAllisonRoy Thank you to all four members of @U2 and crew for the best night of my life. This is a memory no one can take away from me. Best band of all time.

@RRoxtar What an emotional and wonderful night at U2 eXPERIENCE + iNNOCENCE tour. Meeting Bono and The Edge was a bonus. There is a Light indeed.

On The Fansites
Chris Enns (@ichris on twitter) - host of the @atu2 podcast : https://goodstuff.fm/atu2/ - is from Canada and was at both Montreal shows, his first time seeing the show this time around. 'Canadians love U2 and since they've yet to tour Saskatoon, St. John's, or Rankin Inlet, Canadians came from far and wide to converge on Montreal.  And U2 clearly loves Canada. Night one was electric with the band feeding off the crowd's excitement at finally getting to see this tour. The second show in a city - or country in this case - has a tough act to follow. Innocence gone. The crowd is a bit more experienced.  Night two saw the band put on a great show. To mix it up, the band swapped out Gloria for All Because of You. My tastes lean towards the former, but plenty of folks were excited to hear the latter. U2 leaves Canada with a strong message of Canada's ability to love... being bigger than anything in its way ... but still plenty of work to be done. The closing of 13 felt like a message for us north of a country that doesn't always remember how to love:
“I know the world is dumb
But you don't have to be
I've got a question for the child in you before it leaves
Are you tough enough to be kind?
Do you know your heart has it's own mind?
Darkness gathers around the light
Hold on, hold on”

Experience(s) Of The Day
Has to be the adventures of our very own zootopia moderators just ahead of the show today. We had heard that 4 past & present zoomods were in town and were meeting up in 'real life' for the very first time in Montreal. By way of thanks for all they do for us here at U2.com & right across the U2 community, we invited  them to explore that rarely-seen place known as the 'underworld' that exists below the #U2eiTour stage. Dallas, Stuart, Terry and Sam really made them feel at home… Check out the Gallery they have started over in the Zoo (and are adding to) to see what went on. Its pretty special  (@maxtsukino @mich40u2 @u2baja & @_bigwave_ all on twitter and collectively under the @u2comzoomods twitter banner for more).

What did Bono Say?
'We desire to be in the room with the greatest rock'n'roll fans on the planet!'

'Leonard Cohen right in front of you.' (during Beautiful Day).

Review On U2.com / Zootopia
Max Tsukino : awesome, unbelievable, beautiful, moving…and all of this, surrounded by amazing friends, old and new...and then... this happened...

If you were at the show, add your own photos and reviews here.