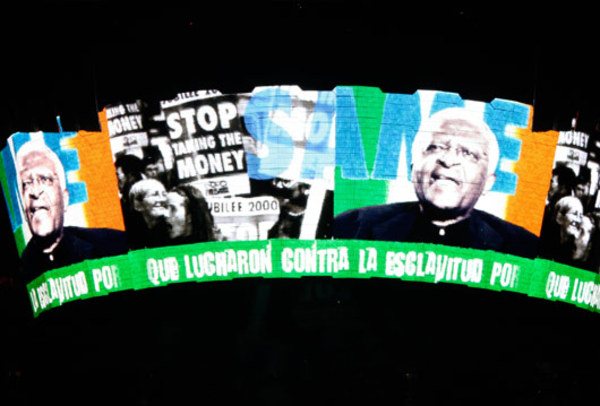 
It wouldn't happen in any other rock'n'roll show. On the opening night of the 360 Tour in Barcelona this week, as the closing bars of Walk On faded out and before the unmistakeable opening chords to 'Streets', the world's most famous clergyman, Archbishop Desmond Tutu, took centre stage.
'Because our voices were heard,' he explained on the huge video screens. 'Millions more of our brothers and sisters are alive, thanks to the miracle of AIDS drugs and malaria drugs...'

Archbishop Tutu, Nobel Peace Prize winner and leading activist against apartheid in South Africa, has been a friend of U2 for many years. He's also the International Patron of
One, the campaigning organisation co-founded by Bono to fight extreme poverty and preventable disease, especially in Africa.

The idea emerged of the Archbishop having a cameo in the 360 show to let people know the impact that campaigners can have, working together across the world - and to encourage even more people to sign up. One was launched in America in 2004, and U2's Vertigo tour resulted in hundreds of thousands of sign ups. There are now over 2 million members, and the campaign went global earlier this year.


Here's where you find out more about One and sign up.

'One of the greatest music men…'