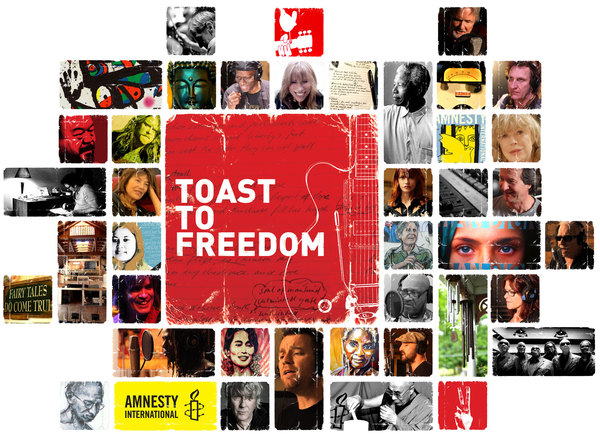 share
'Toast To Freedom' an exclusive commemorative song dedicated to human rights activism around the world and performed by nearly 50 artists, is released today by Amnesty International.

'Amnesty should have their very own song to sing in happy times and in struggling times.' says Carlton. 'To celebrate both small and monumental victories, to comfort loss and overcome pain.'

The track, released to coincide with World Press Freedom Day,  is available for purchase online worldwide and proceeds will benefit Amnesty International. Read more about how the song came together here.

The basic tracks were recorded at the legendary Levon Helm Studios in Woodstock, N.Y,  and following Helms death on April 19, Wilms said: 'Levon was one great soul. I am so grateful we got to work with him, his outstanding band and team in his barn in Woodstock. He was an inspiration and our muse. The song “Toast To Freedom” is dedicated to Amnesty International but in a certain way is now a 'Toast To Levon' and a celebration for him as well: Truth, heart and soul were always part of Levon’s DNA and are the essential basis of Amnesty International and our project. We will miss him and love him forever.'

Visit the Toast To Freedom website. Buy the song from iTunes.