'You're The Best Thing About Me' 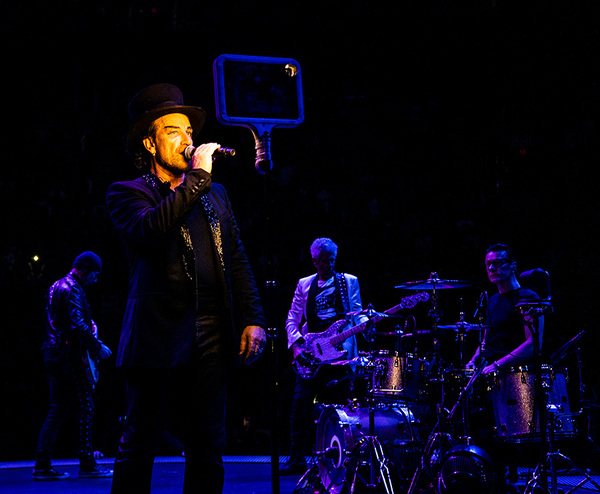 On The Socials
@rjblaskiewicz 'The cage is sort of bonkers. I think I see a disco ball in some sort of sky holster.'

@Caralyn27 '#U2eiTour is awesome so far.  I have a feeling it will end too soon.'

@amy_4211 'I felt like Bono was telling a story to us. To remind America what a great country it is & that it's time to take it back from the tyranny that is Trump. Can't wait to go again tomorrow night! @U2 you just made hump day a whole lot easier to get through.'

@bejwebby 'Unbelievable @U2 show tonight in Philly! Acrobat was fucking amazing and UTEOTW was fabulous per usual...the visuals alone were mind blowing. The boys sounded amazing! Can't wait to dream it all up again tomorrow! Whoop!'

In The Press
Dan DeLuca, Music Critic at phillynews.com :
'Bono gave me goose bumps. It happened at an unexpected time: It was about two-thirds of the way into their two-and-half-hour set, the first show of the spectacularly staged Experience + Innocence tour's two-night stay at the Wells Fargo Center on Wednesday. The U2 singer and his guitarist compadre, the Edge, did a solo acoustic version of "Staring at the Sun," a gem from the band's largely forgotten 1997 album Pop. The singer described the song from the band's self-consciously garish period — Bono called it "psychedelic" — as being about "willful blindness," and it at first came across with a beautiful languor, as the Edge strummed and the lifetime bandmates' voices intertwined.
But what happens when you stare at the sun too long, and ignore the world around you? You lose touch, and if not careful, get burned. And suddenly the song's blissful idyll was shattered. Bono and Edge were still harmonizing on the circular second stage located on one end of the arena floor, but the giant rectangular double-sided video screen above that was filled with images of disharmony. And hate: Tiki torch-wielding white supremacists in Charlottesville, Va. were on the march, and swastika-bearing neo-Nazis paraded the streets. This is what happens when Western democracies fall asleep at the switch, and fear and intolerance are allowed to rear their ugly heads, the images said. Despite all of Bono's globalist rock star statesmanship, all hope seemed nearly lost. But in the darkest hour … that's where the goose bumps came in. Cue "Pride (In the Name of Love)," the undeniable anthem from the Irish band's 1984 album The Unforgettable Fire. Wipe those heinous people off the screens, and replace them with a superhero come to save the day: Martin Luther King Jr. — "One man come in the name of love" — locking arms with civil rights activists…'

Experience Of the Day
As the singer left the e-stage, still singing the song 13 on his way out of the arena, Rebecca just happened to be in the right place at the right time
@beckyjmac. 'That moment when he looks right at you. And you get a head tilt.  And your amazing friend captures the pic!  And then you melt.   And all is right in the world.'

Review on U2.com / Zootopia
Some practical advice from Zootopia dmway :
1, if you want to be on the rail in GA, if you're in the queue before they open the doors, you're most likely going to get some kind of rail. (I got on it if I had wanted to stay there, despite the traffic getting me there MUCH later than I had intended.)
If you hate traffic, and you want to see U2 in the Wells Fargo Center in Philly, be sure to check whether or not the Phillies have a home game first on the same night. The traffic going down, not so bad - the traffic leaving, OMFG... I met an older lady from the South side of Dublin (who moved to the area 50 years ago, and yet still has kept her lovely Irish brogue) who wrote her origin on a sign for the band to read - Adam definitely caught sight of it (and acknowledged with a smile).

And don’t forget -  #WomenoftheWorldTakeOver.  Ahead of the show, why not... SING IT. RECORD IT. POST IT.
Sing the song, share it online. Join the movement.

If you were at the show in Philly tonight, add your own photos and reviews here.