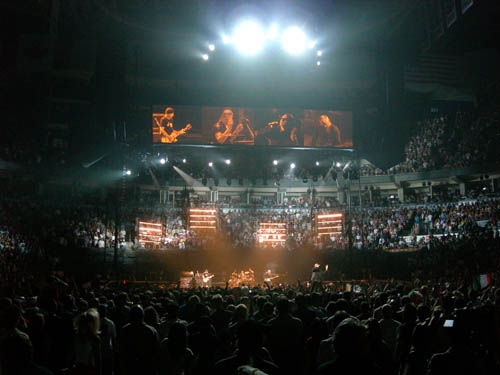 New songs and famous faces as Fall dates get off to a flyer in Canada tonight.
Eighteen thousand Canadians got the third leg of Vertigo '05 off to a deafening start at the Air Canada Centre tonight. After a month away, the band appeared  rejuvenated and a blistering 23-song set suggested the Fall dates are going to be among the best of the whole year.
'Hello, hello...Toronto!'  announced Bono as the set opened with Vertigo and raced into the  familiar quartet of I Will Follow, Electric Co., Elevation and Beautiful Day. The first surprise came with the opening chords of  In A Little While, making its return to the stage for the first time since the Elevation Tour. 'We haven't played that in a little while...it's fair to say!'
Almost every song got an ovation tonight, Toronto was delighted to have U2 back.
'Don't get too big for your boots Toronto!'  joked Bono. 'With your film festival and all, don't forget your rock'n'roll. Tonight this is a rock'n'roll festival.'
Seemed like everyone who  is anyone is in town  for the film festival and lots of them were having a rock'n'roll festival tonight. Ray Liotta, Cuba Gooding (in a very cool hat), Harvey Keitel, Lian Lunson, Toni Collete, Hal Wilner and Curtis Hansen to name a few. There's no doubt which film Bono thinks is the best in show. 'I'm very proud that the best film on show happens to be an Irish film,' he said. 'Breakfast On Pluto.' (And the best documentary he added, is Lian Lunson's 'Leonard Cohen I'm Your Man'.)
As Edge picked out the familiar chords of 'Still Haven't Found', Larry and Adam caught their breath, Bono thanked everyone for turning up... and offered a little apology.  'Normally we start out in Toronto and then move out West, this time we were working up to Toronto !'
No small earthquake of applause for that one. City of Blinding Lights had some beautiful new visuals thrown up on the illuminated curtains around the stage while Miracle Drug went out to all the doctors and nurses. The potent trio of Love and Peace, Sunday Bloody Sunday and Bullet The Blue Sky was as chilling tonight as on the first leg in North America six months ago, but this time there was a twist, brought over from the European shows: Miss Sarajevo.
'So what a strange year, we're lovers in a dangerous time,' rapped Bono, dropping in a reference to a song by the legendary Canadian singer-songwriter Bruce Cockburn. 'All the devastation, London, Turkey, the Middle East, these are strange times to live in London or New York or Toronto. We have a song to dedicate to this time and we'd like to turn it into a prayer tonight and the prayer is that we do not become a monster in order to defeat a monster...'
And so Edge began playing the keyboard intro to Miss Sarajevo, a song originally recorded with Brian Eno and set in war-torn Bosnia.  'Is there a time for human rights?'  sang Bono, which was  the perfect cue  for the screens above the stage to begin scrolling the UN Declaration of Human Rights.
Pride, Streets and One ran into a lovely snatch of Old Man River as everything was illuminated with ten thousand cell phones.  For North American fans this was the first time to hear and see the Vertigo '05 versions of Zoo Station and The Fly. A few minutes later came an even bigger surprise with  the arrival of Fast Cars, a track that many fans had never heard before - and one, as Bono admitted, the band had never played live.
'I'm going nowhere
Where I am it is a lot of fun
They're in the desert to dismantle an atomic bomb
I watch them channel hop
Check the stocks
I'm in detox
I want the lot of what you've got
If what you've got can make this stop...'
Fast Cars appears as  the twelfth track on How To Dismantle An Atomic Bomb, but  only on the Japanese and UK versions of the album, and the Deluxe edition. Credit to those fans on the front row  who were, unbelievably, singing along word for word!
We shouldn't forget to mention that earlier in the evening, Dashboard Confessional got the  third leg off to a great start (more on them in the coming days). A fine opening night of four in Toronto, with lots of twists and turns and the promise of even more later in the week.

Vertigo
I Will Follow
Bullet With Butterfly Wings
/ See Me
/ Feel Me
Elevation
Beautiful Day
/ Many Rivers To Cross
/ Sgt. Pepper's Lonely Hearts Club Band
In A Little While
I Still Haven't Found What I'm Looking For
City Of Blinding Lights
Miracle Drug
Sometimes You Can't Make it On Your Own
Love And Peace Or Else
Sunday Bloody Sunday
Bullet The Blue Sky
/ Please
/ The Hands That Built America
/ When Johnny Comes Marching Home
Miss Sarajevo
Pride (In The Name Of Love)
Where The Streets Have No Name
Ol' Man River
/ One
Zoo Station
The Fly
All You Need Is Love
/ With Or Without You
All Because Of You
Fast Cars - Jacknife Lee Mix
Yahweh
40

AJ Keeps an eye on the Singer, Vertigo 2005
All Because Of You
«