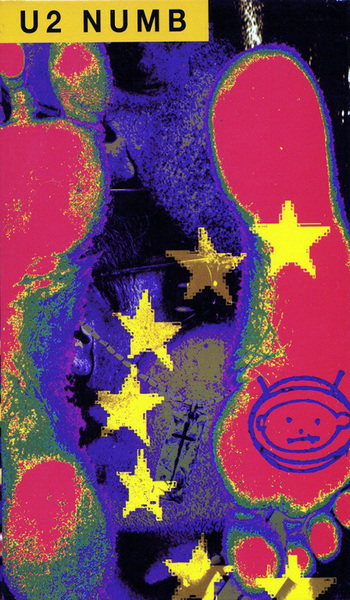 The track appears on the album Zooropa: a video single as opposed to any of the regular formats was released for this song.

The Edge takes lead vocals and performed it live for the first time on July 7, 1993 in Rome. The Edge performed Numb at the MTV Video Awards in Los Angeles on September 3, 1993 - his first live solo appearance. The Soul Assassins Mix can be found on the Last Night On Earth single. On US TV Weird Al Yankovic read the words of Dr. Suess' Green Eggs and Ham to the tune of Numb as a parody. A recorded version of the song by Die Krupps can be found on We Will Follow: A Tribute to U2. The Gimme Some More Dignity mix appeared in the movie Showgirls. An edited version of the same mix can be found on the compilation Special Brew. The Our Tribe Mix of Numb appeared on the audio book (CD and cassette) for William Gibson's Neuromancer. British dance experimentalists The Orb created two remixes of Numb - The Assassin (live orbient) and Numb (def + numb mix 2). Both remain unreleased.

Released Date:
16 August, 1993
Produced By:
Iain Brown.
Engineer:
Directed by Kevin Godley
Label:
Island video
Recorded At:
Comments
0
You must be a logged-in member to add comments.
SIGN IN / SIGN UP
©2022 U2.  Powered by Live Nation Entertainment.