'A Toast to Freedom' 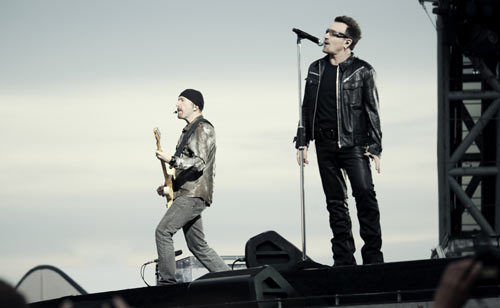 share
'People have been saying it's cold? No, not at all!' mused Bono, as a  huge Canadian audience cheered in agreement. ' I don’t know what they’re talking about. You’re Canadian…we’re Irish… and we have some real men in the band, you know who you are...
'Fourteen years ago we played a show here we will never forget. It's a privilege for us to come and play for you.
'What are you going to play for us The Edge?
The Edge had prepared a number called All I Want Is You and with its opening bars, Winnipeg could hardly have been hotter. Earlier, planes from the Canadian airforce aerial team The Snowbirds had  offered us  three dazzling fly-bys in the minutes before the show, including one which spectacularly circled the stadium, but it was Even Better than The Real Thing that signalled the arrival of the main space attraction of the evening.
'Hands in the air Winnipeg,' announced Bono, as the 360° space ship signalled take-off. 'That's 'Winnipeg' with two 'n' 's.' he added, referencing an earlier on-screen typo.

It's always good to be in Canada and although it was one of the coldest nights of the tour, the threatened rain never materialised and the warm reception of this capacity audience kept the temperature rising all night long.
'Winnipeg smells like Roses,' said Bono, holding up a bunch of flowers, handed to him towards the end of Until The End of the World. ' Flowers for Damascus, Flowers for Peace...'

Special mention to The Fray, who are playing support on these opening North American dates. 'Thanks to The Fray for coming on this adventure with us. They told us they'd take us out for dinner last night and stuck us with the bill. But its cool....'

Tonight will live long in the memory for  being the fiftieth anniversary of Amnesty International and focussing on ' a beautiful spirit' who symbolizes the human longing for freedom.
'Aung San Suu Kyi  is to Asia what Nelson Mandela is to Africa,' rapped Bono, after an elegiac version of Scarlet. 'She has lived without her freedom in Burma for most of the last twenty years, under house arrest.
'Her crime was to believe the election result that made her leader of that country.  But she’s out  now and that is a very special thing for this band and for our audience who  have campaigned for her release for the past ten years or more. And Amnesty International  who campaigned for twenty years.'

As Walk On closed, Bono recalled the origins of Amnesty, before raising a pint of Guinness in tribute: 'Fifty years  ago Amnesty was formed because two Portuguese students were imprisoned for seven years for raising a toast to freedom, so in their honour tonight we raise a toast to freedom and might you join us in singing Happy Birthday to Amnesty International...'

A rousing and moving birthday chorus for Amnesty gave way to 'another special message which was unbelievable to imagine even a year ago.' as onto the huge screens above the stage the iconic face of Aung San Suu Kyi herself appeared, bringing thanks from the people of Burma for the work of Amnesty and of U2 fans in campaigning for freedom in her country.

Only One could follow that and it did before 'Streets', 'Hold Me, Thrill Me...' and finally With or Without You when the cellphones of Winnipeg turned 'this place into the milky way.'

'What a wonderful night, thank you, thank you...'

Were you at the show in Winnipeg  tonight? Write us your own review and upload your photos to our tour page.