'And love is not the easy thing…'

'And love is not the easy thing…'

Walk On remastered in HD for the 20th anniversary reissue of All That You Can't Leave Behind.  Filmed in King's Cross in London in February 2001, and directed by Liz Friedlander.

Comments
7
You must be a logged-in member to add comments.
SIGN IN / SIGN UP
IamU2too
11 January, 2021
Wow, just wow
When I first heard this song, I had a bizarre, surreal feeling that this was the song on the album (what's an album lol) that was going to have a severe, metaphorical impact for the future. I get goosebumps EVERY time I hear this. I love Bono's lyrical audible "you can count on two fingers - all that you steal" when he performed this post-9/11. Great job on the remaster!! 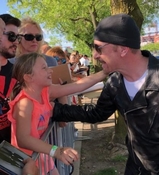 musicabona
18 October, 2020
Touching ode to freedom
With images of the band and small episodes played by actors this video generates a lot of emotion. The sequence of different people and also Bono tearing their shirts creates a strong moment of tension. I love seeing the diversity of characters populating the video. In the end the suitcase with the heart appears as a powerful symbol reminding us that love is the essential thing we should always take with us.
garyquintana
12 October, 2020
A Master Piece that creates interest
First off great image improvements. This song takes me back while in Afghanistan. I felt like blasting this song to all the oppressed from the evil rule of the taliban. Them lyrics just sums it up and takes me back for a little taste of hope for the villagers. And as a matter of fact I did play the song to some villagers and eyes lit up, and it didn't matter if the Lyric wasn't comprehensible or not. We had a translator. lol Wow, what a throw back, what a great memoir. I guarantee those villagers remember Walk On. just wanted to throw that out. Peace
lassche
08 October, 2020
A mazin g Son g of:
FREEDOM. .. ... 14:40. V-Hunter. Miss You Sugar.

cristiu2
07 October, 2020
What an improvement!
Wow, what an improvement those videos in HD!! So much detail. Looking out for the next video.
robbie01
07 October, 2020
WALK ON!
The year this was released I was going through some really bad tough times! This album & especially this song helped me so much in moving forward. It was/is still a struggle sometimes but I walk on.
cgmorgan777
06 October, 2020
Beautiful song
This song, no words can express how amazing this song is.
Newer comments    1 - 7 of 7    Older comments

Band Videos, Reissued Albums, All That You Can't Leave Behind
©2022 U2.  Powered by Live Nation Entertainment.