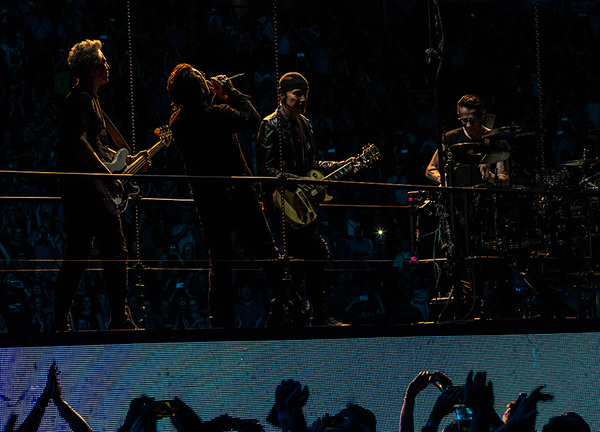 When & Where
Second and final night  in the Manchester Arena, Saturday 20th October 2018.

Set List
Took up tonight where we left off last night.
Another storming show with the ‘Berlin sequence’ getting stronger by the day - Zoo Station, The Fly, Stay and Wild Horses. That's the first time we've heard Zoo Station and The Fly back to back since the Vertigo Tour days. And how about that thunderous new outro to ‘Wild Horses’?

On The Fansites
Tyler & Jonny are, in their own words, ‘2 bespectacled U2 fans from Manchester.’ Together they become one voice when hosting their in-depth U2 related podcast from this very city, which they call ‘RevU2’ (get it?). They're planning a full feature length episode very soon on the #U2eiTour in general, but kindly sent us this mini-episode about these very special Manchester shows.
(transcribed)
’13 years from Vertigo (Tour), U2 come back in full force. All the fans last night and the night before seemed to be having the most amazing time. Everyone’s singing from the same hymn sheet… the crowd was totally unified… and I think it’s such a good time to be part of the U2 community. The love that Manchester was feeling, in the clubs, the restaurants, the bars beforehand… everyone was playing U2… Everywhere you went you could hear U2 playing. People wearing U2 t-shirts… from tours recent and far away… all the faded ones… the ones that still fit! It was… full circle… 13 years from when we first saw them… it just felt really special… everyone was really on the same page last night. There was not a ‘dead’ song. The was at no point when the crowd went flat…. they were on their feet, singing, clapping. We saw them standing on the Friday night, and seats on the Saturday, and one thing I noticed is that Bono, he’s a singer obviously… but he’s also a conductor.. he just ‘conducts’ the crowd. You can see things from a seated position (it was great to be so close, near the barricage on the first night.. an arms length almost away from the band), but that second night from the seats, you could see Bono ‘manipulating (in the best possible way!) everyone’s reactions… he had them in the palm of his hand. You wanna get up close and personal… try and touch them (Security!) - get a good picture… that was good for the first night… but a show like this, so epic, so vast, so many different key points of the stage, so much you would miss if you didn’t see that screen from a distance.
I was worried going into this tour, are they gonna re-hash the same sort of thing they did for Innocence (Tour)… obviously it's some of the same equipment… but it was TOTALLY different.. Experience (Tour). The fact that the ‘Barricage’ can now be taken apart.. and you have the ramp… and the floor which will come away from the main cage… and you’ve got an extra row of LED’s underneath it… it just extends it… I felt that there was NOTHING that stage couldn’t do! That in turn create this atmosphere that there was NOTHING that couldn’t happen… We also had a really fitting tribute to Manchester… its difficult to describe how emotional that felt. It went form complete euphoria… having a great rock and roll show on a Saturday night, party time in Manchester… to something bigger. It got everybody… it really did get me. It’s that kind of positivity and love and unity that U2 are so good at creating AND sharing with their fans. That's where songs like ‘Love Is Bigger (Than Anything In It’s Way)’ find their home… that’s where they belong… I’m getting goosebumps… such a great experience last night. Pun intended completely!’

On The Socials
Carol8 (via Zootopia) 'I’ve said this before (but this time I mean it!!) U2 yet again draw me back in if I ever had any moments of doubt! Wild Horses in particular was a standout for me and at one point as they were all together at the end I thought wow the energy was amazing!! During stay I got a bit emotional and two complete strangers one beside me and a lady behind me asked if I was ok so sweet.. damn u2 they know how to set me off!'

@spikesound (via Twitter) 'Real goose bump moment last night in Manchester when watching U2 for the first time and heard the opening guitar to I Will Follow - amazing concert and stage design.'

@louie1401 (via Twitter) 'The defining moment of the show for me - so much emotion in this song & Bono’s whole performance- the throwing of the lightbulb carries so many meanings.'

@NigeCarroll (via Twitter) 'Hansa by the wall in Manchester last night! Ireland is in for some show when the Experience & Innocence Tour hits Dublin. They actually outdid 2015. Unreal night in Manchester. Euro flag an all! What a time for U2 to snap back into the Berlin buzz.'

What Did Macphisto / Bono Say?
‘Guess who’s back? Back again… Macphisto’s back, tell your friends. Macphisto is back in his most favourite club on the planet. You sort of invented clubs, didn’t you my little Manc-ey pants.. That’s why your Monday’s are not Happy… they’re Blue! The Hellfire Club… now, that was my gaff, that was the place to be..  I don’t want to be a part of a club that I can’t burn down, so I’ve been a busy devil, burning down all kinds of clubs; The United Nations, NATO, the EU…’

(To Ali) :  ‘ Sorry to be talking about our love in front of other people all the time… but I guess you fell in love with a Showman. '
‘It is what it is, but it's not what it seems
This screwed up stuff is the stuff of dreams
I got just enough low self esteem
To get me where I wanna go oh’

(B- Attitudes) : Blessed is the University… 21 Nobel Prizes… Blessed is Coronation Street, Royal… Manchester… STILL a great European city… Blessed is Bobby Charlton.. Blessed is Jack Charlton. Blessed are the Blues… and the Reds!”

Were you in the house tonight ? Post your reviews and add your photos here