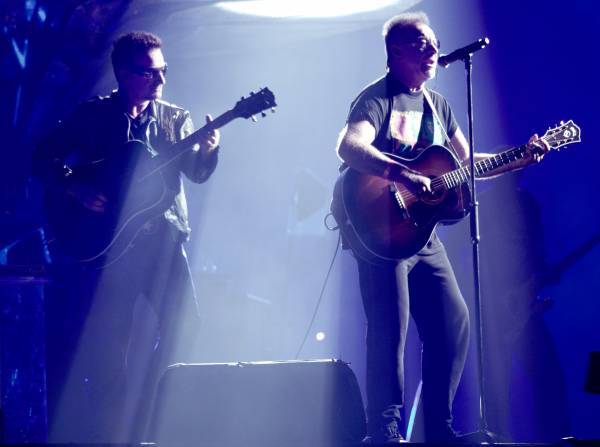 
Thunder and lightning set a dramatic scene for tonight's final date in Buenos Aires. The  Argentine national anthem was followed on the stadium sound system  by Soda Stereo, another tribute to  Gustavo Cerati, and just as we were expecting the new show opener... we didn't get it.

There's nothing predictable about this show. Tonight The Return of The Stingray Guitar was back to announce the arrival of the band on stage with Bono singing 'Argentina, Argentina...' as the unreleased track segued into Beautiful Day. They were among the first of five changes to the show including the return of Pride and, for the first time in 2011, to Bad.

It was a seriously rocking night with @alonsonico on twitter, who lives in La Plata, reporting that his 'flat is shaking right now because of the concert.'

The sonically reimagined Even Better Than The Real Thing arrived when we weren't expecting it after 'Boots' and La Plata kept shaking for Mysterious Ways. It was turning into a memorable way to bid farewell to our weeks stay in this wonderful land.

Following Still Haven't Found, Bono thanked Muse, after another electric opening set, 'for coming with us on this incredible adventure.' It set him dreaming out loud about his country... and this country.

'I think the Irish and Argentine we speak too much. We drink too much.
We are religious but we argue with God.
And when we are not arguing with God we argue with the British...'

You might have the edge on us in the football, he continued, but 'In the rugby we kick your arse. We are a tiny country and you are a BIG country.
Our ego is as big as your ego. We think we invented you. We believe an Irishman is one of the fathers of Argentina. Admiral Brown came from County Mayo...'

And in another unexpected twist, now the band welcomed a very special guest to the stage in Leon Gieco (pictured above), the celebrated Argentine folk singer and with Larry and Adam watching on, he performed Solo Le Pido A Dios (I Only Beg God) with  Edge and Bono joining on guitar and the entire stadium joining on vocals.

Were you at tonight's show? What was the moment you'll never surrender? Add your own reviews and post your photos on our Tours Page.