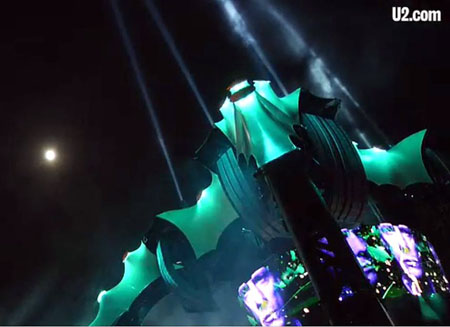 College show at the University of Virginia in Charlottesville with its own special vibe from a very cool audience who were also well into Muse. (Incidentally, noticed that most of U2 at different moments were also out to catch their set. )

The spirit of Thomas Jefferson is with us tonight, the man who founded this University and was the lead author of an enduring little document called The Declaration of Independence. 'How is Mr Jefferson, ' cries Bono a few minutes into the show. 'Is he in the house?'

As the tour winds its way through North America the show is becoming more unpredictable with the choice of tracks and the running order changing by the night - No Line on the Horizon comes later tonight before the roof-raising, stadium-shaking Magnificent and Elevation. Your Blue Room is finding its place too, a mellow, ambient reflection before New Year's Day and Still Haven't Found launch the 360 space station into orbit again.

If Washington the other night had a distinctly political vibe, tonight we have another makeover as Bono introduces his bandmates for the benefit of the uninitiated.

'Would you let me introduce my room mates ? Behind me the jock, the captain of the football team....on my left, the cheerleaders friend, he plays the four-string instrument, because, in his own words, 'girls love bass'.

And seeing from the clip we have, a lucky local girl who had the scarf she knitted taken and worn by Bono, everyone had a great gig.

Were you there? Tell us what it was like and post your photos in our comments area.

Ultraviolet
With or Without You
Moment of Surrender