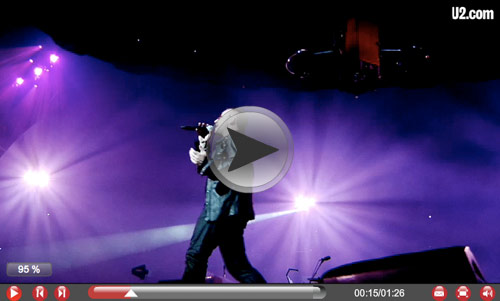 As our clip shows it was a crazy night in Amsterdam - here's a few highlights we picked out. If you were at the ArenA tonight, add your reviews below.

* Ninth show of the tour and the first time that 360 has come indoors. The Dutch were some of the earliest fans of the band outside Ireland and the UK and have always been some of the loudest. Louder still when there's a roof overhead.

* 'See the world in green and blue/ Larry Mullen right in front of you'.

* 'Some funky stuff please..' Nothing is funkier than Mysterious Ways and as the groove gets going and a stadium gets moving, Bono pays thanks to this city and country. 'Thank you for so many nights in this city, the mysterious and magical port of Amsterdam. We've a lot of history here...' Some of that history, like photographer Anton Corbijn, is here for the show.

* It's the fortieth anniversary of Neil Armstrong's walk on the face of the moon, a moment that impressed itself on a 9 year old future rock star. 'I remember it so well, an image of making the impossible possible and I've held on to that with more earthly problems...' Fittingly the astronauts from the International Space Station make a brief cameo on screen, holding up signs reading, 'The Future Needs A Big Kiss.'

* 'Keep On With The Force Don't Stop/Don't Stop 'Til You Get Enough.' Angel of Harlem, first written for Billie Holliday, is back in the set tonight, a playful acoustic interlude and a tender tribute to the late, great Michael Jackson.

* 'We were teenagers when we first played the Paradiso, Larry still is a teenager. Apart from that everything's changed. Still got a long way to go, Adam, Larry, Edge and myself...' Bono's Auntie Eileen is not a teenager. She is in fact 80 years old and at the show. 'All the Hewsons in the house tonight!'

* What's the betting that with the down and dirty dub remix of 'I Know I'll Go Crazy If I Don't Go Crazy Tonight' we are witnessing the birth of a stand-out track in the pantheon of great U2 songs. When Larry arrives on the b-stage with the djemba, it's the cue for all four band members to perform to all four quarters of the house. While Larry and Adam and Bono complete a lap of the b-stage, Edge goes one better, completing a double lap.

* Something of the Vertigo Tour about One, when the lights go down and 50,000 people take out their phones. 'There's planet earth... and here's the Milky Way...'

Comments
40
You must be a logged-in member to add comments.
SIGN IN / SIGN UP
nickie73
21 July, 2009
Arena with blinding lights
Excellent show, songs like Sunday Bloody Sunday; Unforgettable Fire; Pride; still are awesome; Breathe and Magnificent both are fantastic. I pity the sound in the Arena, it feels like the earlier shows in de Kuip (Rotterdam) had a better sound. Anyway...U2 Rocks! Be there tonight again and now I take my family with me! I wish Bono, Edge, Adam and Larry all the best and thank you for your music.
jenny_4
21 July, 2009
i went crazy last night
If you think that the band can't get better, that they reached the absolute top, they surprise you with another fabulous show!!!! It was outragious!!! Hope to see them many tours.........starting tonight (again).
boy_girl
21 July, 2009
GREAT GREAT GREAT
My first U2 show.. and it was awesome. We've been queueing from 9:00 till 18:15, but the waiting was worth every second. We were in the pit. Larry.. great especially on the catwalk Adam.. big smile.. and golfing with our beachball wich we threw on stage!! Edge.. haven't seen him much, but hearing him was great. Bono.. wauw, wat a frontman! And he sung great ofcourse!! Thank you!!
rsp
21 July, 2009
turbo show!
great 1st night in amsterdam. Bono's voice very powerful! Band working hard and rockin': watch them smile :) even larry! See U2night...
Miriam Jonker
21 July, 2009
Spectacular and superb
It was worth the wait outside, we had a terrific view next to the stage. The stage: a superinvention, cudoos to the designers, it worked tremendously for the fans. The setlist was superb, especially enjoyed The Unforgettable Fire, I heard it live for the first time. The remix of Go Cazy is a blast! U2 was in terrific shape, the stadion rocked!! Thank you so much!!!
GuidoWater
21 July, 2009
Best show ever!
Not specialy because i'm a u2 fan but this was the best concert i've ever seen! Love thet new songs and specialy crazy tonight! What a fantastic songs they made of this! Looking more like techno then rock and roll! The arena is famous for bad sound quality but the U2 360 stage has made that rubbish! The sound was great and the show even greater! What a band! What a stage! What a Show! What a Sound! What a great great evening! Thanks a lot guys keep on rocking!
Oboema
21 July, 2009
to go where no one has gone before....
Just amazing...,thank you for Ultraviolet Thank you for an awesome show We were flabbergasted! See you tonight,again
Ard75
21 July, 2009
Going Carzy
Thanks to the band and the crew for a truely magnificent performance in Amsterdam; better than 2005! And: thanks for playing Ultraviolet!!!! Suggestion: Moment of surrender didn't do it as a closer, in my view the song comes at the wrong time.
harold24
20 July, 2009
A Beautiful night in Amsterdam
What a night, what a band, what a noise, U2 Rules and no other band can't even come close to their live performances! Thank you for the music! See you tomorrow in Amsterdam for the second night.!
andwe
20 July, 2009
AWSOME SHOW
Just came home..... still in the sound!
Newer comments    31 - 40 of 40    Older comments