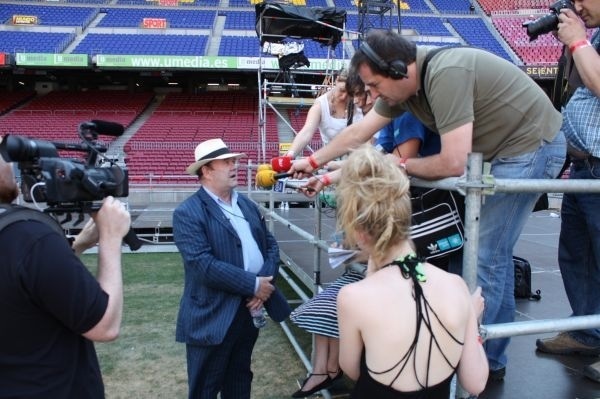 share
Spanish press in the house last night, first chance for the media to check out the new production. Some of the key players in the production were on hand to explain how it's all come together, including the band's manager Paul McGuinness and Mark Fisher, the co-designer of the new stage production.

1. 'It's a perfect stadium for us to open the tour,' said Paul McGuinness. 'There's no running track around the pitch, the seats are close to the stage and Barcelona have just won the Champions League so everyone's in a great mood!'

2. The band have rehearsed more than thirty songs but the set list is changing at every rehearsal - nothing is set in stone for Tuesday.

3. Ever since he was a fresh-faced architecture student, Mark Fisher has loved the Catalan visionary Antoni Gaudi. 'So when people here in Barcelona say to me that the new production reminds them in some way of Gaudi... that means a lot to me!'

4. Three stages will leapfrog each other across Europe and North America between shows. Sound, lights and screens will be loaded out after each show and head straight to the next city.

5.'It would be crazy if they weren't a bit nervous about the opening of a new show,' explained Paul McGuinness. ' It's a very complicated production but that's why we've been here for a while now, rehearsing the production, as much as the music.'