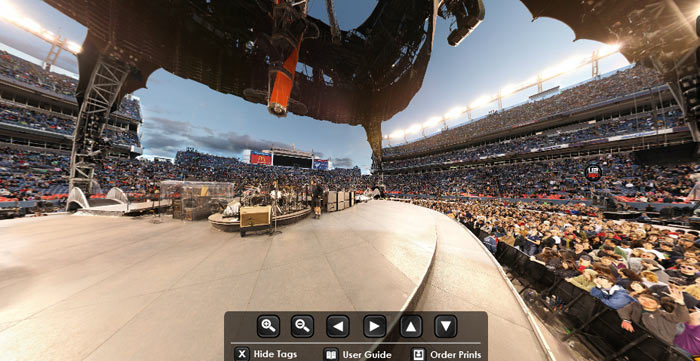 share
Remember the breathtaking 360° images we posted after the shows in South Africa?

The ones where you could zip around the stadium and zoom in anywhere - from your best mate to Larry's drum kit ?

Not only do we have sensational 360° images from the shows in Denver and Salt Lake City but U2360° FANCAM is going to be covering the rest of the tour as well.

And after each show we'll be posting the huge images from the 360° gigapixel camera on U2.com - so you'll be able to explore every corner of the venue, then zoom in and tag yourself or your friends.

Were you at the shows in Denver or Salt Lake City ?

Know someone else who was?

Here's what FANCAM captured in Denver.

And here's the image from Salt Lake City.

Coming to one of the shows in June or July? Want to look your best for the camera? Here's what you need to know.

The U2360° FANCAM imaging is executed about fifteen minutes after the support act has left the stage - you will see a camera set up at the downstage area during this time and if you see the photographer rotating the camera, raise your hands towards the centre of the stage to get in the shot as it's taken! Make it a special 360° live moment to keep and share with your friends!

(The FANCAM, in beta-mode with U2.com right now, is flash-based and may not be available on all devices.)