'First Night Of Our US Adventure.' 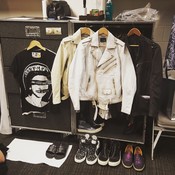 First night of two in San Jose and first night in the USA. Here's what we found out.

1. 'Alright now, we're a band from the north side of Dublin, U2, formerly The Hype...' The Miracle (Of Joey Ramone), Out of Control, Vertigo, I Will Follow, Iris (Hold Me Close) - five songs to open a new U2 show, spanning five decades of life, there's barely time to catch your breath. 'Welcome to the first night of our US adventure...'

2. 'A U2 show comes with heightened expectations and an almost euphoric anticipation for a cultural touchstone. It's an impossibly high bar to meet. For more than two hours last night, the seminal Irish rock band did just that. A blistering start and finish book-ended a tech-tinged show that is bombastic, brilliantly absurd arena rock...' From the USA Today review of the show.

3. There's no support band on this tour, but there are several 'acts' - and in the break between the first and second, the band leave the stage for a few minutes and the great divider takes all your attention. Last night this was the moment for the premiere of a new interpretation of The Wanderer, the band's collaboration with Johnny Cash from 1993's Zooropa. A mesmerising piece of video art, you couldn't take your eyes off the screen as the face of the late, great American musical icon grew older and older before your eyes.

'I went out walking through streets paved with gold
Lifted some stones, saw the skin and bones
Of a city without a soul
I went out walking under an atomic sky
Where the ground won't turn and the rain it burns
Like the tears when I said goodbye.

Yeah, I went with nothing, nothing but the thought of you.
I went wandering....'

4. There are several stages in this show, the mainstage, the stage within the screen, the runway stage under the screen.. and the 'e' stage - 'e' for experience. The band are everywhere and have probably never been so close to so many of their audience in any show before. And when they four of them are crowded together on the small 'e' stage, and the house lights go up and everybody can see everybody singing along to 'When Love Comes To Town' and 'Angel of Harlem', that's something else. 'When Love Comes To Town' was for BB King again - ' a prince of a man, royal in every way' - while 'Angel' was for the Revd Cecil Williams, the minister of Glide United Memorial Methodist Church in San Francisco, 85 years old and in the house tonight.

5. 'Bono set the tone in the first break, riffing on the tour’s iNNOCENCE + eXPERIENCE theme and asking the crowd: “Can you still experience innocence after all of these years?” That’s not always an easy question with U2. At this point, multiple generations can claim U2 origin stories; the musical bookmarks from their past that brought them out on a Monday night to sing along in near-religious fervor to the group’s biggest hits. At the same time, the band had the audience questioning: Where is our innocence after Ferguson and during the AIDS crisis? What have we learned from the assignation of Dr. Martin Luther King, Jr. and the conflict in Ireland? Can we become global citizens? What is magic and what is a trick?
Perhaps, that’s what U2 does best. In the wake of thousands of glowing cell phones and selfie attempts, it’s a band that can still insert a little humanity, charity and mystery into the rock ’n’ roll juggernaut. On Monday, it was nostalgic and refreshing—and it felt a little innocent—all at once.' From the Metro Silicon Valley review of the show.

Were you at the show? Add your own review and photos here.