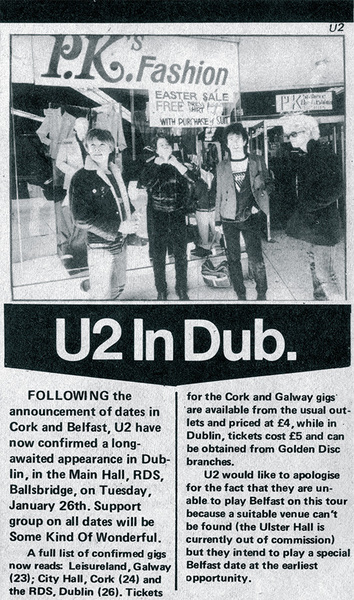 share
“We give something to the crowd and they give us something back,” says Bono. “Everyone pushes themselves until they sweat – and through that, a type of force or power is created by the people."

North Side Story is the definitive account of the emergence of U2 in Dublin in the 1970's and early '80's. Along with a unique catalogue of interviews and reviews from Hot Press magazine, the book features a series of profiles from influential European music titles  - including this one from Germany's Music Express in 1982.

It was by far the biggest gig that U2 had undertaken as headliners. Rather than doing two nights in the National Stadium in Dublin – scene of the triumphant gig, which had secured a deal for them with Island Records – the band had decided to up the ante significantly with a show in the Main Hall in the RDS. It was a statement of intent that this was a band that could fill big venues and make it work. That was the spirit in which Island Records issued an invitation to Steve Lake to travel to Dublin to see their hottest young charges in action for German magazine Musik Express. The writer, Steve Lake, was quartered in one of the most obviously jerry-built hotels in the city, which may well have affected his mood somewhat. As it turned out, his view of Dublin was far folksier than would have seemed right to Irish eyes at the time. Nor was he entirely sold on U2. No matter....

Commissioned from the Hot Press team in Ireland, North Side Story  covers six formative years from 1978 to 1983, from the first single, 'U23', to the live album, Under A Blood Red Sky.  Running to 274 pages, this heavyweight book of rare photos, original interviews, diaries, letters and profiles comes with 'North & South Of The River, Wandering In U2's Dublin', a poster-size map charting U2's Dublin.

Find out more and Subscribe to get your own copy of North Side Story. (Current subscriber? Click here to renew.)

Features, North Side Story, Press
U2
©2020 U2.  Powered by Live Nation Entertainment.