Originally released in October 1981, Gloria was the second single to be taken from the album October and has been a live staple ever since. This special anniversary release includes the studio version of 'Gloria' plus three live versions from three different decades.

The 1990s are represented by the Point Depot show on the band's home turf of northside Dublin.  Although ticketed as 31st December 1989, the show started at midnight on 1st January 1990 with a live radio simulcast broadcast across Europe.

Side B contains two previously unreleased live recordings of 'Gloria' – recorded at the Fleet Center in Boston during the 2005's Vertigo Tour, and at London's O2 Arena during the third night of their run of shows in the English capital as part of the iNNOCENCE + eXPERIENCE Tour in 2015.

Record Store Day is the annual celebration of independent record shop culture. Special vinyl releases are made exclusively for the event and many shops and cities host artist performances and events to mark the occasion. There are over 240 shops participating in the UK with thousands celebrating around the globe in what's become one of the biggest events on the music calendar.  The Black Friday Record Store Day will take place on 26th November 2021.

Comments
10
You must be a logged-in member to add comments.
SIGN IN / SIGN UP
gero27
26 October, 2021
Black Friday
I hope I am able to get up early to try to grab this one for sure!!
Friel4real
23 October, 2021
Would make a cool t-shirt!
Would love to see a t-shirt with this design! I always have a hard time finding these releases. I usually have to buy on e-bay, which I guess still helps small record stores with online sales?
Rob18
23 October, 2021
Robert
It would be nice to tour 40 :-). Just old songs. I love the old raw sound of guitars.
DPOverLord
22 October, 2021
NY store?
Be great to know and be ready love vinyl
GINO5
21 October, 2021
use of this
whats the use of this . i want new stuff
lassche
27 September, 2021
U2&WE?!
The Saint are coming! Be the light, feel the light seek the light. Love and light my way. 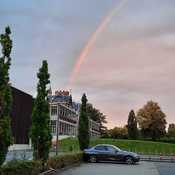 hzham
27 September, 2021
Gloria made me a U2 fan...
.. although I already owned "Boy", it was indeed Gloria & the October LP which made me a fan. Had to wait a long time to hear it live, but it happened on the E&I Tour :-) I MUST have this one !!
MichaelHarris
25 September, 2021
Glorious Gloria
Wow 40 years old, how the time has flown by !! will get my record dealer on the case to order for me hopefully. another great collectable.
cristiu2
24 September, 2021
Nice collector's edition
Great release. Nice u2 is doing these things for RSD. Maybe it's an idea to release cd-versions. Record Stores are selling cd's as well. Or better release a collection of these releases on cd for a fanclub release. Wide awake in Europe on cd would be amazing!
Luis68
24 September, 2021
U2 fan from Australia
I’m a huge fan can’t wait for this such an incredible song and love the photo on the cover and the colour of the vinyl
Newer comments    1 - 10 of 10    Older comments

Forty years young... but what three tracks could you not live without?

'It’s tender and beautiful — somewhere between a hymn and a folk song.' A U2 playlist from broadcaster and writer John Kelly.