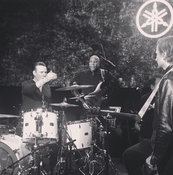 Larry was in Los Angeles this weekend, honoured with a Lifetime Achievement Award from Yamaha.

As well as getting behind the drums to join other musicians including Nathan East and Butch Walker on a set of U2 favourites - 'I Still Haven't Found What I'm Looking For’, 'Angel Of Harlem’, ‘Pride (In The Name of Love)’ and ‘Desire’ - Larry took to the microphone for a self-deprecating speech, paying tribute to his bandmates as well as his longtime partners at Yamaha.

“I’ve spent the best part of my career sitting down, looking at the backs of three other men’s heads! That vantage point gives me a unique insight into the minds of singers and guitar players since I don’t always get to read their faces. So can I begin by guessing what’s going through some heads right now. “

A few years ago, he said, the first thing that would have entered his mind on hearing Yamaha were giving him something was “YES, a free motorcycle!”

"Luckily for the tour insurers there is no bike!  I’m humbled to accept the Yamaha Lifetime  Achievement Award. Like you I’m wondering if there’s been a terrible mistake. It’s worth mentioning Yamaha’s impeccable eye for spotting and investing in young talent, but there is a large part of me that still thinks I was just the cheaper alternative to Phil Collins and Neil Pert!”

Larry underlined his great sense of gratitude to the team at Yamaha, in particular Chris Gero and John Whittmann. "Yamaha have been incredible partners over 35 years. Chris has made it his mission to make Yamaha endorsees partners - not workhorses. That’s a great feeling when you’re out there putting everything into your music: to know that someone respects the art and the process as much as you do.”

Comments
54
You must be a logged-in member to add comments.
SIGN IN / SIGN UP
U2fan4lyfe
30 January, 2017
Larry in the zone.
As noted, Larry led the Yamaha All-Star Band in a set of U2 classics.