'Louder Than Any Rock Band...' 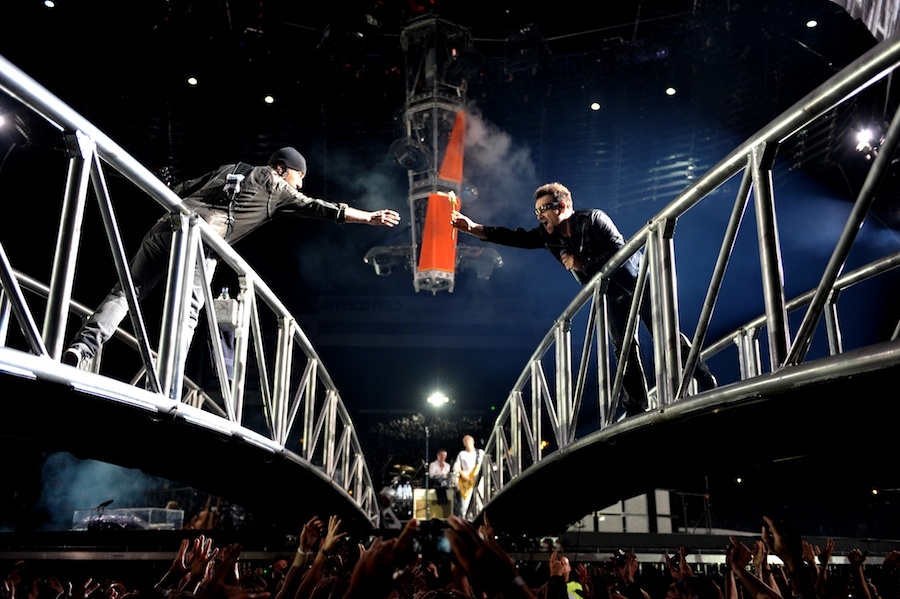 'You who across such distances sent such support to Burma - we thank you: students, teachers, workers, mothers, fathers, sisters, brothers, music fans - U2 fans like me.
'When you raise your voices we hear them in our country and around the world, they are louder than any rock band, than any army, than rocket fire or fighter jet...'

Remarkable moment tonight as the North American tour opened in Denver when Aung San Suu Kyi, sent a video message thanking U2 fans for campaigning for the freedom of the people of Burma.

'Your voices,'  she said, 'Are the future - the voices of reason, equality and justice.'

As Bono puts it, Aung San Suu Kyi is to Asia what Nelson Mandela is to Africa and only recently did the military government release her from nearly 20 years of house arrest.
'She's out now and that's very special for us, for U2 fans and for Amnesty International who campaigned for her release,' said Bono, 'This campaigning stuff really works.
'Aung San Suu Kyi wanted to say thanks, but also to remember all the remaining prisoners. This is a message of love from Colorado to south-east Asia...'

In fact this was a pretty unique night all around, the band opening up their postponed US and Canada dates, a year to the night that Bono left surgery in Munich  and with a set list transformed from the one that opened this tour nearly two years ago.

Bono thanked a passionate Denver audience for their patience. 'I thank God... and the Germans! Through the wonders of science I'm not just fixed, I'm better! Bono 2.0...'

It was a good moment to introduce the wonders of the band.

'A wonder of nature, Adam Clayton became a father in the last year, still a young buck though!
'Part-Terminator part Duracell Bunny....Larry Mullen Jr on drums...
'In the place where art meets science, the super hero who was bitten by a spider and turned into a nerd...on guitar, The Edge.'

And reiterating his thanks for the patience of the fans, we were into one of the great fan favourites All I Want Is You - one of ten tracks that were not in the show when the band began their first leg of US/Canada dates.

The rain, which had been threatening all week, held off and we were set for a special evening.
Special with the Denver audience welcoming some of their own when The Fray were first up on stage in their home town.
Special because this is the home town of a legendary member of the U2 crew 'who's been looking after Edge's guitars for nearly 25 years. Stand up Dallas Schoo...'
Special because this is Red Rocks country, where Under A Blood Red Sky was recorded... how else would you introduce Sunday Bloody Sunday?
'Where's Red Rocks? Right here!' And it felt like it was.
And special because despite all the predictions in the end the world didn't end - but they'd prepared a song for it. Just in case.
'This is for the Rev Harold Camping.' explained Bono, introducing Until The End of the World. 'Such a disappointment... somewhere feels like the end of world but not right here!'

Did the world end for you tonight... or did it begin again? What was the special moment you'll never surrender, the memory you'll take till the end of the world? Add your own review and post your photos on our tour page.

'THIS, WE NEVER IMAGINED…’