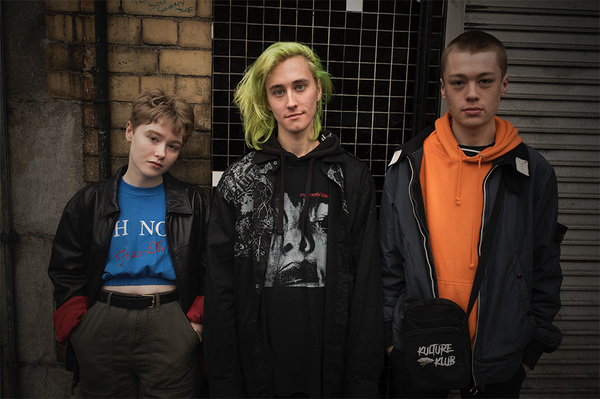 Travelling the world documenting the life and style of teenage youth culture, Vogue photographer and filmmaker David Mushegain developed a particular affection for the uniquely creative environment he found in Dublin. He found himself returning to the city repeatedly over eight years, particularly to document people in their teens and early twenties.
'I'd made friends with a lot of people and kept in touch with them.  I noticed they have such a unique take on personal expression, how they create their own style, the colours, what they do with clothes and hair.'

David harboured the idea of some kind of project capturing that aesthetic but didn't know what it was until Guy Oseary, manager of U2,  invited him to take a listen to tracks on the then forthcoming record Songs of Experience.  Listening to 'Love Is Bigger Than Anything In Its Way' he says, was a lightbulb moment.
'I gravitated towards that song immediately. It has the spirit of these young people I'd come to know, the spirit that says whatever's in your way, you can overcome it. It's such an uplifting song, it has such a positive spirit.'

The result is a beautiful, graceful and life-affirming documentary video which accompanies the release of the song this week. Spending time with people he already counted as friends and meeting many more in and around the city, David invited young people to let him celebrate their lives on camera.
'While filming I didn't actually play the song for anyone which I thought was fun. I just wanted to document people being themselves and having fun and then put it to the song later.
'I like the mix of portaits and dancing because we get this moment to really stare at someone and appreciate their eyes, their style, and get a taste of their soul. Then when we see the dancing clips we see another side of their personality.'

David's original idea had been to focus on LGBTQ individuals but the canvas broadened across all youth culture  as the idea came together.  'The LGBTQ community is made up of course of people who are LGBTQ themselves, but the community also includes friends and family so really it's inclusive of everyone.
'It's about being young and expressing yourself, it's about how we all have friends and relatives who dress or look or style themselves differently but, as the song says, love is bigger than anything in its way.
'I've always loved the LGBTQ community, I go to Pride parades around the world - I can't imagine a better party - and the idea behind the video is about  a celebration, to celebrate love, to celebrate individuality, to celebrate everyone.

He was first taken with the unique culture of Irish youth as a busker in Galway and Dublin in his early twenties. Years later, shooting photos on a world tour with Red Hot Chilli Peppers, he 'really got back into the style of Irish youth'  returning again  to shoot for Vogue magazine. With this new video he also wanted to tap into the history of U2 and the geography of the song itself.

'The song talks about Killiney Bay so we went out to Killiney to meet people there, I hope it captures a special sense of Dublin.
'I had a feeling that people often think of Ireland as religious, as Catholic and closed but many of its young people are more open than anywhere. If people are maybe from a small town and don't feel accepted, often they head to Dublin.'

As one of his subjects in the film puts it, 'I'm not from Dublin but since I moved here I feel like I can really be myself, that's really nice… back home I would be ridiculed for dressing the way I do but here it's good.'

'There would be some cities where people would be wary of what I was trying to do but not here, they really get into this, they way they styled themselves, the make up, how they went for it during filming.'

As another of the film's subjects puts it of Dublin, 'It's embracing the fact that we are human beings here, we are able to do whatever we want, we are not restricted by the fact we are in a smaller country or a more conservative country - it's far more open… nothing is restricting us from exploring creativity.

Songs of Experience
U2
©2020 U2.  Powered by Live Nation Entertainment.