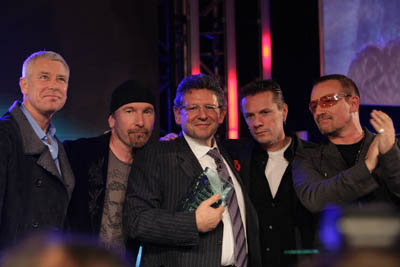 Mika, Take That, Jamie Cullum and Razorlight were among those performing for 1200 guests - and more than £500,000 was raised in an auction for Nordoff-Robbins Music Therapy and the BRIT School.

A limited edition lithograph of the 'War' album sleeve went to Benny and Bjorn of Abba while Bono's green Gretsch was snapped up by retail magnate Philip Green.

Adam, Larry, Edge and Bono all took the stage to make the award to Lucien Grainge, Universal Music Group International chairman/CEO who is marking his thirtieth anniversary in the business.

'He's great because he's ready to take on the world for British music, and Irish music for that matter,' said Bono. 'He's a tough guy when it comes to deals but he's a very tender soul to deal with if you're U2.'

Grainge, who said he started out - and remained - a 'talent-scout', has worked with everyone from Eurythmics, Elton John, Metallica, Amy Winehouse and Duffy. Previous winners include Sir George Martin, Harvey Goldsmith and Peter Gabriel.

Press, Awards, Other
©2022 U2.  Powered by Live Nation Entertainment.