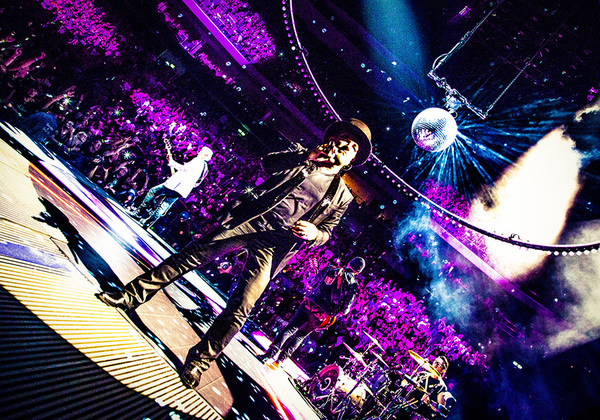 Back on stage and on song on the opening night in Cologne.

When & Where
Second European city of the tour, first night of two in Lanxess Arena, Cologne, Tuesday, September 4th, 2018.

Set List
The band were in fine form in Cologne tonight, the tour right back on track after Saturday's cancelled show in Berlin ( https://www.u2.com/news/title/back-on-song-back-to-berlin). Until The End Of The World closes out the first half of the set, and, according to fansites and statisticians, has its 600th live performance here tonight. Here’s the full set list

In The Press (translated into English via google translate)
'U2 in the Arena. Bono regained his voice for Cologne and against Nazis …before the start in the Lanxess Arena, standing ovations on the first note, anticipatory silence during the two and a half minute intro video, a compilation of war scenes (from 1945 to today) and portraits of dictators and freedom fighters. In addition the requirement: "free you - in the name of the democracy"... The oversized screens release the view of the band, the first track ("The Blackout") plays. It is already clear: Bono has his voice again... "Thank you for being here - and thinking about our lives with us… I have visited a very good doctor and will continue the tour with his support and in full voice." No contradiction. ...The fateful fourth song "Red Flag Day" (here Bono barely made a sound in Berlin) succeeds. No emergency doctor today, instead rock until the doctor comes. "Beautiful Day", which could barely be heard in Berlin, mutates in Cologne significantly to the first highlight, thousands of Rhenish throats sing every word by heart for the first time. "I'm very grateful for that, today it's going well again," Bono explains on stage… next highlight: the unplugged version of "Sunday Bloody Sunday", which accompanies Larry Mullen with a snare over the bridge, Adam Clayton on bass and "The Edge" - Bono in front..."Pride (In The Name Of Love)" shows overcrowded refugee boats, followed by photos of the Chemnitz Nazi march. "No more Chemnitz!" Bono shouts through the megaphone...'

On The Socials
@amanda_mcphee (via Twitter) 'Waking up before 4am is what you do when @u2 are in Europe and you’re on the other side of the world following #U2eiTour. It was brilliant to hear you sing again today Bono. What a blessing. The sun is shining. It’s a beautiful day'.

@mysteriousdays (via Twitter) 'The audience is singing along with the oh oh ohs at the end of Love is Bigger!  all the chills & all the feels, gosh I love this moment'

@SheilaDC (via Twitter) 'When you don't believe I exist...that's when I do my best work' is one of the most powerful statements each night at @U2 show! Stay vigilant! #Biteback'

What Did Bono Say?
(as Macphisto) "I see my old friend Bono lost his voice in Berlin. Brava! Brava!… I think he has his very best moments with the sound turned down!”

‘The show's going really well tonight. The voice is strong. Still feel like summer in Cologne. Very grateful. The crowd here have been very kind’.

If you were at the first show in Cologne, add your reviews and add your photos below: