12 Jul 200923
share
Were you there at at the Stade de France tonight ? Here's some of our highlights from the show - add your own reviews at the bottom of the page. Meantime here's a clip we caught of the band walking to the stage tonight. 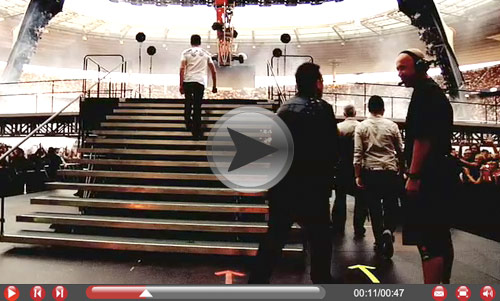 1. First up there were three songs in the set tonight that weren't in it just two weeks ago when the tour opened. Angel of Harlem, Stuck In A Moment (You Can't Get Out Of) and, making its 360 debut, Mysterious Ways. Six shows in it feels like the band are preparing to mix up the set list - that's 27 tracks they've played on the tour to date.

2. Some people have commented that Breathe is not an obvious show opener... not like Vertigo say, on the last tour. Wait till you've been to a show and seen how it goes down. Maybe it's the pent up anticipation of finally getting to see the band again after four years but hearing 90,000 people joining in the opening song makes a pretty convincing case.
'Walk out into the street
Sing your heart out
The people we meet
Will not be drowned out...'
Tonight they were not to be drowned out all night long.

3. Notice how Adam is making the giant circumference of this stage his own. He did an entire circuit tonight during Beautiful Day and from the moment he and Edge, crossed the bridges simultaneously onto the b-stage, it felt like the band spent more time reaching out to all parts of the audience. 'Thank you for giving us a chance to build this space station, you paid for it, hope you like it. ' explained Bono. 'We think it's going to take us to all kinds of places but most of all its job is to get us close to you. That's what the 360 experiment is all about...'

4.The birdsong rings out crisp and clear at the start of Unknown Caller and Bono reminds people that the song was written in Morocco. 'We recorded some of the album in a beautiful riad in Fez with the birdsong coming through the roof... this is for all of you here from North Africa.' Sounded like there was plenty of Tunisians and Algerians and Moroccans in the house tonight and the karaoke style lyrics on the screens marry with the chant-like vibe to create perfect sing-a-long. 'Paris, France - you know your name!'

5. 'Sometimes I feel like I don't know
Sometimes I feel like checking out.
It was a song a lot of people were hoping might make its way back into the set list after going missing for a decade or so. And the combination of the singer returning in a spectacular suit of lights with the opening chords of 1991's Ultraviolet makes the encore all the more special.

So there's a few highlights from us and here's what they played. What did you think?