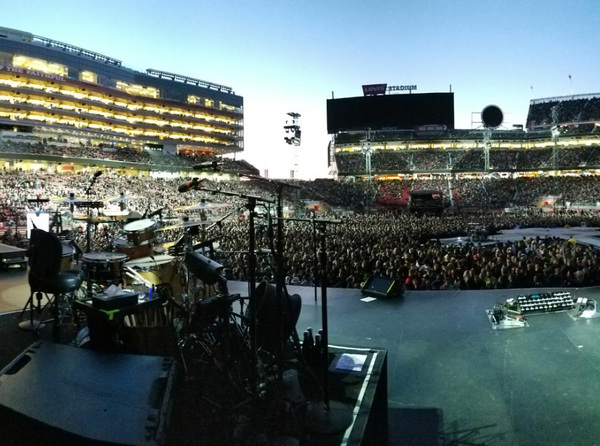 Cathleen Falsani reviews night three of  #U2TheJoshuaTree2017 as it arrives in Santa Clara.

"I can't believe the news today…"

Those six prescient words from "Sunday Bloody Sunday," penned nearly 35 years ago but embodying an immediacy that made them feel as if they had been written this week, opened the show in Santa Clara and brought 50,000 people to their feet, many with arms raised aloft signaling fledgy yesses into the brisk night air.

"I can't close my eyes and make it go away…"

"How long, how long must we sing this song?"

While I've seen each of the first three shows on the Joshua Tree 2017 tour, Wednesday night's gig in the heart of California's Silicon Valley managed to take me by the shoulders and pull me, heart first, through a threshold in the time-space continuum between the formative past and the palpable present.

Before launching into a retelling of The Joshua Tree album in its entirety, the band reached back to 1983's War and 1984's The Unforgettable Fire albums for five songs performed on the Joshua Tree-shaped B stage.  It was so much more than nostalgia. It was transcendent, transportive.

Many of us Gen Xers in the rapt audience, viscerally recalled what it was like to be our wide-eyed or clench-fisted adolescent selves hearing "New Year's Day," "Bad," "Pride (In the Name of Love)," or "A Sort of Homecoming" for the first time, as we dreamt dreams and entertained visions of our personal and collective future.

"And you hunger for the time, time to heal, 'desire' time, and your earth moves beneath your own dream landscape…"

Thirty years later here in America, the place that U2 more than admires—"America, we love you; we love you," Bono would say later —we find ourselves in a moment of tumult and division unlike any in recent memory. Many of us are dismayed, angry, fearful. Many of us want to do something to change our trajectory, to widen the aperture of our perception.

We are, as Bono put it, "the furious and the faithful."

As each member of the band moved center stage to perform the The Joshua Tree's 11 tracks in sequence, the massive LED screen behind them awakened in blazing vermillion lacerated by the silhouette of an enormous Joshua Tree, and for the remainder of the concert literally widened our apertures. (The 200-foot-by-45-foot screen is the largest and highest resolution screen ever used in touring history.)

Then Anton Corbijn's black-and-white films moved us through the high desert along an empty, lost highway; where rivers (and hopes) seemingly run dry. His starkly stunning visuals breathed new life and pertinence into The Joshua Tree stories that many of us know by heart, even as subtle tweaks to the album's tracks in live performance—from the addition of a horn section compliments of a Salvation Army Brass Band to "Red Hill Mining Town" to the almost conversational phrasing on "Running to Stand Still"—gave them fresh, sonic energy and relevance.

"What to say about this present moment but these few words," Bono said by way of introducing "In God's Country."

I have never made it all the way through a U2 concert without shedding a few tears—of joy, desolation, or elevation. But in Santa Clara, enraptured by the power of the stories as they unfolded in new ways before me, I made it all the way to the penultimate song of the encore before they came.

I've always had a soft spot for "Miss Sarajevo" and its special-guest-appearance by the late Luciano Pavarotti. I've heard it performed live numerous times. But this time, in the context of everything that came before it and employed as a soundtrack to the visual story of Omaima, a 15-year-old Syrian girl in the Zaatari Refugee Camp in Jordan, the song broke—no, not broke, opened—my heart in new ways.

"Hold her up," Bono told the crowd, as a huge fabric print of her black-and-white passport photo was passed hand-by-hand by the audience in the stands, making it around the stadium's horseshoe perimeter.

The evening ended with a song from the forthcoming "Songs of Experience" album called "The Little Things That Give You Away." The band has performed the new tune each night of the tour so far and in the Levi's stadium, it found its stride.

"Sometimes, sometimes, I'm full of anger and grieving," Bono sang, "so far away from believing that any song will appear."

And yet it does.

If you were at the show, tell us what it was like. Add your own review and photos on our tour pages here.