Opening with ’The Miracle (of Joey Ramone)’ in Vancouver, 37 shows later #U2ie finished up in New York City with ’40’. How long to sing this song? Nearly three months...  and so many highlights. Here’s some of ours, add yours in the comments - and tell us what you’re looking forward to when the tour resumes in Turin.

‘I wanna feel sunlight on my face...'
In New York, fansite atu2.com were celebrating their twentieth birthday at a special party… when who should show up but Adam and Edge.

'This Is A Song…'
Beautiful video animates this track in the show, but for the single release, it came with striking performances from Woody Harrelson and Zoe Harrelson. Song For Someone.

‘Everybody’s famous here but nobody’s known…'
Want to follow the tour up close and personal? Got to be on Instagram. The band got into it big time.

‘Street sounds like a symphony…'
What are you hoping for when the band turn up on the ’e’ stage? You’re never disappointed if they play Angel of Harlem.

‘Lover, I’m off the streets...’
And you’re never disappointed if they play Desire. Least of all when Jimmy Fallon climbs out of the audience and grabs the mic.

‘Shout, shout...'
Every night there was seven or eight tracks from the latest album and always a couple from the first. Like The Electric Co.

‘Are We Tough Enough...'
Who else but Lady Gaga, taking over the piano and sharing vocals for Ordinary Love at Madison Square Garden.

'Only To Be With You…’
Bruce Springsteen in the house, for the closing night in North America.

Comments
18
You must be a logged-in member to add comments.
SIGN IN / SIGN UP
dougadonie
01 September, 2015
Amsterdam
Hi would love to hear A sort of homecoming in Amsterdam on the 9th for Doug & Lauren Finnie it's my favourite place to be we're coming coming from Aberdeen I've seen these guys on every tour since 92 in Parkhead Glasgow not long now canna wait
adrianamedeiros9809
28 August, 2015
L.A. May, 27
I travelled alone from Brazil to LA just to see you, guys! The most perfect night of my entire life! I wanna see you soon in Brazil!

karin_mtl
26 August, 2015
Montreal hit by an Electric Storm!
Hearing the live debut of Lucifer's Hands and joining the band on stage to sway to Mysterious Ways were both huge highlights for me during Montreal 2. The synergy between band and fans created by the i+e stage set-up also were (and still are) an important highlight, particularly at the Bell Center where the intensity in the building was electric on all four nights! We impatiently await for the third leg of this great tour for yet another stellar performance. Vive U2 à Montreal!
nadiarivas1
25 August, 2015
amazing!
It was such an energetic concert on MSG, one of the best nights of my life! we were celebrating that exactly ten years ago we got to see them on Rome on the vertigo tour. This concert was beyond our expectations, almost 3 hours of singing and dancing.
gerrit_lehmkuhl
24 August, 2015
Cologne
We will come
Cheffyadam
24 August, 2015
Toronto
Both shows, when they let the U2 cover band acrobat sing desire. And the 4 lads watched on. Amazing. And the 2nd show had the young girl play edges guitar. For all I want is you! No other band loves their fans , like U2!
curleydowling
21 August, 2015
The Wanderer/Invisible
Was at the show in San Jose where The Wanderer video premiered. Tears welled up as the beautiful images of Mr Cash flashed across the enormous screen. Invisible was another tremendous highlight. This song gripped me when I 1st heard it & now it's one of my favorite U2 songs after seeing it live. Bravo!
pok24
20 August, 2015
That Time When Half of Montreal Partied
A major highlight for me was the huge party on the main stage during the Montreal 3 concert on 16-June. Bono began inviting members of GA to join him on stage during “Where The Streets Have No Name.” 50+ fans – jumping, dancing, hugging, and high-fiving – a joy filled celebration! Some fans were restricted to the catwalk - I think the main stage had reached its occupancy limit! Bono was quickly surrounded, as were Edge and Adam and Larry – though fans kept a small gap so the lads could continue playing. Larry was assisted by a very enthusiastic air-drummer while Dallas tried to protect Edge’s gear. As “Streets” ended, Bono directed all to “sit down,” “sit down,” “sit down,” – “I’m gonna sit down too” while the band transitioned into “I Still Haven't Found What I'm Looking For” for this U2 “sit-in”

fanavman
20 August, 2015
"The Fly" in Paris
Hey Guy I saw you twice during the 360° tour. Seeing "Ultraviolet (Light my way)" in Paris was unbelievable. I can't wait for the third show in Paris. I'm not sure it's possible with Bono can't play guitar, but my first dream is to hear "The Fly" at Bercy. What a song!!!
sprongie
20 August, 2015
Fire
The absolute highlight would be when they play fire during the Amsterdam shows...
Grylva
20 August, 2015
Come To The Land Downunder!
Still waiting & hoping to hear if they come to Australia... Please...... Get up off your knees now.... Pleaseeeeeee......
hjay
19 August, 2015
Iris
I will never forget when Bono started to sing Mofo before launching into the gorgeous song Iris on May 14th...it was the highlight of this tour for me....felt all the emotion in that song, raw and exposed...saw the pictures flash of Iris in her beautiful lemon coloured dress above me...and cried and cried for the loss of my own mother. Such beautiful release. Thanks U2...thank you so much for this tour. ❤
Vagner Giacomazzi
19 August, 2015
And the fever, gettin' higher...
Five friends having fun in NYC! Thanks U2!!! It was the most amazing day of my life =D 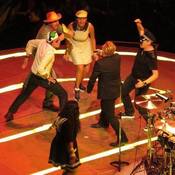 jjwankenobi
19 August, 2015
Back To The Beginning
May 14, 2015 Roger's Arena (us stalwart Vancouverites insist its still "The Garage") The Ramones' "Beat On The Brat" mixed with some of Edge's signature licks signaled the imminent arrival of iNNOCENCE + eXPERIENCE. In Bono's boyhood bedroom, lit only by a single swinging bulb overhead we heard The Miracle, shuffled up Cedarwood Road then bid goodbye to child-like discovery like it was The End Of The World Then we crossed the great Divider, no longer Invisible. Treated to the Real Thing and Mysterious Ways (an Achtung double feature!), we then broke Waves, Bulleted Blue Skies then pondered The Troubles Yes, we all gasped when the unmistakable chords of Streets began to ring out- we gasped even deeper when The Edge met the edge. But in the end, the words "I Still Haven't Found What I'm Looking For" that we all sang as One really said "Amen".
19 August, 2015
Highlight
A highlight for us were the "Crystal Ballroom" and "Cedarwood Road" performances, night 3, Boston!
peach23
18 August, 2015
Brand New
Perth Arena... Yes we're waiting for you too :)
Ruivo
18 August, 2015
From GRU to PHX
I was virtually there in Phoenix singing "Angel of Harlem". Thanks to the live-streaming experience. Thumbs up U2!
kevfly82
18 August, 2015
A Moment of My Life
Outside of getting married to my beautiful wife Linda & watching the birth of our first daughter Evelyn earlier this year, nothing compares to the excitement I felt of singing Desire on stage with U2 in Chicago June 28, '15. I'm so lucky & fortunate. 2 years ago I was getting a strange cancer diagnosis. With the help and trust in great people, I'm still here and got to sing with my all-time favorite band. Truly a dream come true. And we made a new friend that day- Shawn Golley who played rhythm guitar on stage. What I'm sure many people don't know is that Shawn is left-handed and had to flip Edge's guitar upside down to play, still kept the song moving. How cool is that? Bottom line- U2 brings people together. Thank you for this amazing amazing moment in my life guys- you trusted me with your audience and I hope I did the moment justice. Bono, Edge, Adam and Larry- you all make me a better person and like I said on stage- Don't stop making the music guys, Don't Stop! I hope we get to meet again, maybe when Evelyn is old enough to go to her first U2 show with Mom and Dad. -Kevin Crabtree