North And South Of The River 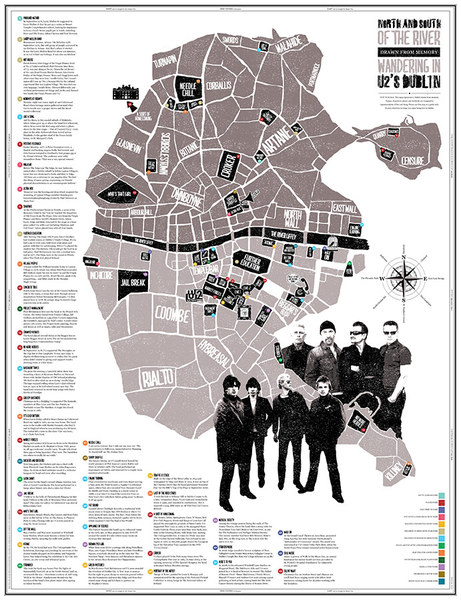 share
Drawn From Memory: Wandering in U2's Dublin is the subtitle of 'North And South Of The River', a beautiful wall map that visualises the story of U2 in their home city over thirty years. It comes with North Side Story, part of our annual subscription offer.

Drawn by Shaughn McGrath, of the band's longtime design team AmpVisual, the map captures 44 events in the life of the band, locating them in an entirely not-drawn-to-scale way which would leave you lost and confused in Dublin if you used it to navigate the city.

Here's a few highlights from the early years.

PINBOARD WIZARD
In September 1976, Larry Mullen Sr suggested to Larry Mullen Jr that he put up a notice at Mount Temple Comprehensive school, looking for musicians to form a band. Seven pupils got in touch, including Dave and Dik Evans, Adam Clayton and Paul Hewson.

LARRY MULLEN BAND
Rosemount Avenue, Artane: ‘On Saturday 25th September 1976, this odd group of people convened in my kitchen in Artane. And that’s where it started. It was the Larry Mullen Band for about ten minutes, so as not to hurt my feelings. It was also my kitchen.’

ART HOUSE
Derek Rowen, later Guggi of the Virgin Prunes, lived at No. 5 Cedarwood Road. Paul Hewson, later Bono of U2, was just along at No.10. ‘Down the cul de sac’, at No. 140, lived Fionán Martin Hanvey, later Gavin Friday of the Virgin Prunes. ‘Bono and Guggi knew each other since they were four,’ recalls Gavin, ‘but I wasn’t mates till I was 12.’ No.5 became HQ for the cultural experiment that was Lypton Village. ‘We invented our own language,’ recalls Bono. ‘Dressed differently, put on these performance art things and, in the end, formed two bands, the Virgin Prunes and U2.’

MONDAYS AT FRIDAYS
Monday night was music night at 140 Cedarwood Road where teenage mates gathered around what Gavin recalls was ‘a proper stereo and the latest record collection’.

LIKE A SONG
Ard Na Mara, in the coastal suburb of Malahide, where Adam grew up, is where the band first rehearsed, where Bono wrote his first song and where a photo shoot for the first single - ‘Out of Control/U2-3’ - took place in the attic. Rehearsals then moved across Malahide, to the garden shed of the Evans family home, on St. Margaret’s Park.

North Side Story, Other
U2
©2020 U2.  Powered by Live Nation Entertainment.