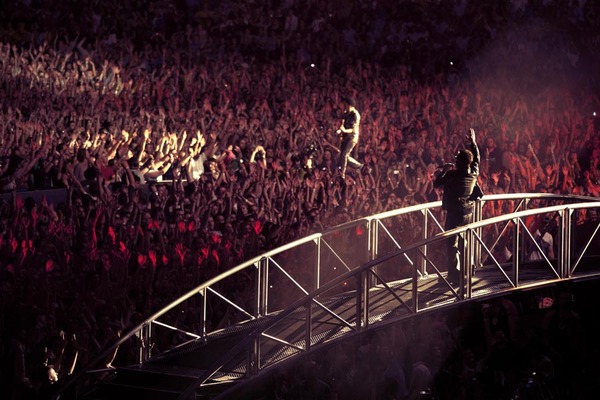 share
First of two nights at the Suncorp Stadium in Brisbane and on the thirtieth anniversary of his death, the spirit  of John Lennon was with us.

'I remember watching John Lennon sing that song for his son Julian,' recalled Bono after the band had slipped in a few bars of 'Stand by Me' during 'Still Haven't Found'. 'Today seems like a perfect day to do that for John Lennon and his family.'

New light on the inspiration behind 'Pride (In The Name of Love)', when Bono explained, ' This next song is about an idea the great John Lennon whispered in our ears as four teenagers on the North Side of Dublin...'

The Queensland audience went ballistic at this point and why wouldn't they? Beautiful also tonight to hear North Star, one of the unreleased songs back in the set and to hear Adam at the microphone, thanking the people of Australia for their generosity.

Threatened to rain most of the evening, but nothing could dampen the spirit of another packed house - the vibes were so good Edge could literally walk on them, as you can see above. It was loud inside - and outside. Elkepancake wasn't even at the show but she knew all about it on twitter, 'U2 is having a concert near my house and I can hear them playing With or Without You and it is pretty much AWESOME...'

Was it a good night for you? If you were at the show add your own review, upload your photos and check the set list on our Tour pages.