'On Their Shoulders We Have Stood' 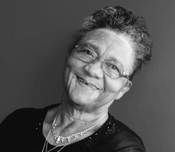 'On Their Shoulders We Have Stood'

In her memoir 'Finding Solace: A Journey of Hope After Tragedy' campaigner Agnes Nyamayarwo recalls how she first met Bono and how they inspired each other in the fight against HIV AIDS.

Cathleen Falsani, who first got to know Nyamayarwo on the The Heart of America Tour twenty years ago this month, spoke to her for U2.com

While some fans may not have been familiar with the name Agnes Nyamayarwo until they reached the "Miracle Drug" chapter of Bono's Surrender memoir, the stories of the Ugandan nurse and HIV/AIDS activist and U2's lead vocalist and chief 'actualist' have been intertwined for more than 20 years.

The two first met in January of 2002, and then again a few months later when Bono traveled with then-U.S. Treasury Secretary Paul O'Neill to four African nations, including Uganda, on a fact-finding tour about, in part, the growing AIDS emergency in sub-Saharan Africa.

Nyamayarwo, a nurse and mother of 10, was a volunteer with The AIDS Support Organisation (TASO), an NGO established in the late 1980s to assist Ugandans living with HIV/AIDS. In 1992, the year her husband, Augustine, died of AIDS-related complications, Nyamayarwo also tested positive for the virus. Rather than keep the news to herself, she spoke about her status publicly hoping to combat the stigma that made the spread of the disease particularly pernicious.

Triggered by Augustine's death and her HIV-positive status, in 1993, one of her older children, 16-year-old Charles, began showing signs of mental illness and eventually disappeared. It's been 30 years, and Nyamayarwo has never seen him again. Cruel tragedy struck once more a few years after Charles' disappearance, when her youngest child, Christopher, died of AIDS-related complications at the age of six.

'I realized the two simple choices I had to make, it was either I lie down and give up or fight to stay alive and look after my remaining children,' Nyamayarwo writes in her recently published memoir Finding Solace: A Journey of Hope After Tragedy. 'I cannot imagine what my life would have turned out to be if I had succumbed to the stigma.'

Despite working full time to support her surviving children, Nyamayarwo made time also to volunteer with TASO, the organization that had helped her husband and family find what medical and pharmaceutical help was available to them at the time. She continued her work with TASO, eventually even adopting a young boy named David, the son of her niece, who had been orphaned when his mother died of AIDS.

Ten years after her diagnosis, AIDS drugs were still neither affordable or readily available in Uganda.  Following Bono's visit to TASO, Nyamayarwo writes, she and her TASO colleagues began to receive antiretroviral treatment.  Nyamayarwo made such an impression on Bono that a few months later, he invited her to accompany him (and Ashley Judd, Chris Tucker, and a Ghanaian children's choir) on a 10-day tour of the American Midwest in December 2002 to raise awareness about the AIDS emergency in sub-Saharan Africa.

It was at the launch of that tour that I first met Nyamayarwo on the exceptionally snowy Sunday morning of December 1, 2002 at St. Paul United Methodist Church in downtown Lincoln, Nebraska. She had accompanied Bono onto the stage (if not the pulpit he ended up preaching from) for the inaugural stop on The Heart of America Tour by DATA (Debt AIDS Trade Africa—the forerunner of the ONE Campaign.)

At the time, I was a reporter for the Chicago Sun-Times newspaper and had managed to talk my way onto the DATA bus caravan from Nebraska to Nashville, where Bono, Nyamayarwo, and their comrades urged college students, people in the pews, civic and religious leaders to help light a fire under their politicians to support massive relief efforts for millions of Africans living with (or trying to) HIV and AIDS. The gentle woman with sad eyes the color of molasses behind which burned the kind of fierce grace that inspires everyone she meets to do whatever they can to ease the burdens of others, changed countless lives, including mine.

'I just spent 10 days traveling across the country with (arguably) the most popular rock star in the world, and by far the most incredible person I met on the trip was a woman named Agnes.

In fact, it was Nyamayarwo's story of adopting David that helped shape my decision several years later to adopt our son, Vasco, after we met him as a young child living on the streets of Malawi after losing both of his biological parents to HIV/AIDS—something I had not had the chance to thank her for directly until last week when we met via Zoom for this story.

'Bono tells people that when he met me, I changed his life, but he changed mine, too,' Nyamayarwo told me. ' Bono meeting her and the "Grandma Group" of 25 others,  was more than a year before President George W. Bush announced PEPFAR (aka the U.S. President's Emergency Plan for AIDS Relief). This was a program she helped inspire and lobbied Bush in person to create, leading to lifesaving ARVs and other treatments becoming available to millions of Africans.

'It was really great of [Bono] to give me the chance to talk to so many people, to be able to convince Americans and other G8 countries who have been able to keep the treatments going up to today,' she said.  As of September 30, 2021, PEPFAR has supported antiretroviral treatment for 18.96 million people, enabled 2.8 million babies to be born HIV-free to mothers living with HIV, and provided critical care and support for 7.1 million orphans, vulnerable children, and their caregivers so they can survive and thrive, according to a recent U.S. State Department report.

One of the core efforts of Nyamayarwo and her colleagues at TASO was helping newly HIV-diagnosed people create 'memory books' for the children and other loved ones they would leave behind.

'Photos, mementos, family history, letters for future occasions, advice. Messages of undying love,' Bono recalls in Surrender. The 'memory books' idea stayed with him over the years, resurfacing as a catalyst for songs, the album All That You Can't Leave Behind, and perhaps, even the Surrender memoir itself.

Recounting a conversation he had with Brian Eno during the gestational phase of ATYCLB, in the chapter "Beautiful Day," Bono recalls Eno telling him: ' "You were talking about the memory books people who have HIV put together for their loved ones, for when they are not around. An album as a memory book is an idea."'

The TASO memory books also inspired Nyamayarwo to write Finding Solace. In the book, she thanks Bono for his kindness and generosity that has 'given me and many others a fighting chance at life.'

'This sustained my health and so I have been able to see my children grow, and to experience the joy of being a grandmother,' Nyamayarwo writes. (Today, she has 13 grandchildren.)

In Surrender, Bono describes the quiet strength Nyamayarwo displayed daily during the Heart of America Tour 20 years ago and since, speaking, as he describes it, with a 'numerate lyricism rarely louder than a whisper.'

'The numbers of her daily life: the year of her husband's death, the number of kids she'd lost and was left with, the length of a diagnosis, the age of her youngest son, and the time of day that he passed. I noticed how often we brush over the details of people's lives when such details are in fact our lives,' Bono writes.

Until COVID-19, PEPFAR has been the largest health intervention to fight a single disease in the history of medicine.

'I think of the intensity of my last two years and wonder at the staying power of the activists who've been doing this for decades,' Bono writes. 'Never letting up. I think of Agnes … or any of the people responsible for my being here. Driven by the loss of their families, friends, colleagues. On their shoulders we have stood.

Comments
2
You must be a logged-in member to add comments.
SIGN IN / SIGN UP
ca1043
25 December, 2022
Intriguing!
Agnes sounds amazing. I did not reach this part of Bono's memoir yet, but now I will definitely pay more attention when I get to it. My job is draining me right now... no mental or physical energy to read after work... However, now I am excited to pick it up again. Happy New Year everyone! ~Christine
orange12
01 December, 2022
An Amazing Woman
An excellent article outlining how the political always turns into the personal. The example of one outstanding woman - who could easily have just given up and faded away quietly - has become a symbol of hope for the many. And, as ever, Bono is in the middle of it all: moving things along, using his fame as currency, searching out the 'little people' and making them larger than life (if they weren't already), standing on the shoulders of giants.
Newer comments    1 - 2 of 2    Older comments

'With Or Without You' is the second track released from Songs of Surrender. Listen here.

'Bono & The Edge: A Sort of Homecoming, with Dave Letterman' to premiere on Disney+ for St Patrick's Day.