On Coldplay, on Radio 1 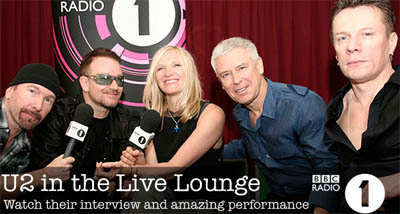 At the BBC on Friday, the band did a whole bunch of interviews on different shows and talked about everything from the new album to who the musical competition is. As usual they talked about Coldplay, about how much they admire them and how hard they've worked to make it.

In Jo Whiley's Live Lounge on Radio 1 the subject came up again and here's what they said. Bits of this conversation have appeared elsewhere - here's the whole segment.

If you're in the UK you can watch the whole interview here.

Jo Whiley: Hello to all of the band. My first question , sent in by listeners, is 'do you pee in the shower'? Look at their faces!
(Gasps and much laughter)

Adam: Not at all! No, I definitely do not pee in the shower!

Larry: Well (laughing) when I read that Madonna did it..

Jo Whiley: Yeah, we heard that. Bono? I bet you don't.
(More laughter)

Edge: That means she pees standinng up!
(More laughter)

Jo Whiley: You guys! Well I asked my listeners what they wanted to know, and a lot of them asked for that one.

Jo Whiley : Bono, you did an interview just now with Zane Lowe where you talked about Coldplay and said that Chris Martin is right up there, right up there with the likes of Paul McCarthey?

Jo Whiley: Are you going to apologise for what you just said, live on my show on Radio 1?

Bono: (gasps, inhales sharply) Oh, sorry, I'm a reformed character, by the way! I don't do that any more!

JW: You're not showing signs of being reformed...

Bono: Can we delete that?

Bono: And he's a disfunctional character and a cretin.

Bono: (getting serious) But he happens to be a genius melodist and, I think, up there with Ray Davies and Noel Gallagher and Paul McCartney and I absolutely think they're a great band and it actually turns out he's a great soul as well. So, I'm sorry, sorry about that...
(Both laugh)

Jo Whiley: And I am sorry if anybody is listening at the moment and you were offended by the bad word that Bono said just now, and I apologise on Bono's behalf too.

Bono: I was just joking entirely.

Jo Whiley: And I know you like to play the album to other people, contemporaries, was there talk of a night out with Chris Martin in Dublin, did you get him over to listen to the music?

Bono: We were up in Scotland actually, for Hogmanay and that's the best place to be in the world for New Year isn't it? And people were
coming and going and Chris as well... we play it for everyone, really, from the bell boy...

Bono: Yeah, taxi drivers, the hotel people and you can always hear songs through other peoples ears... you know if there's a boring bit cos then the taxi driver starts to call his missus, must be the start of the guitar solo. (both laugh) OK, it was the chorus.
(More laughter in the studio)

No Line On The Horizon, Interviews, Other
©2022 U2.  Powered by Live Nation Entertainment.