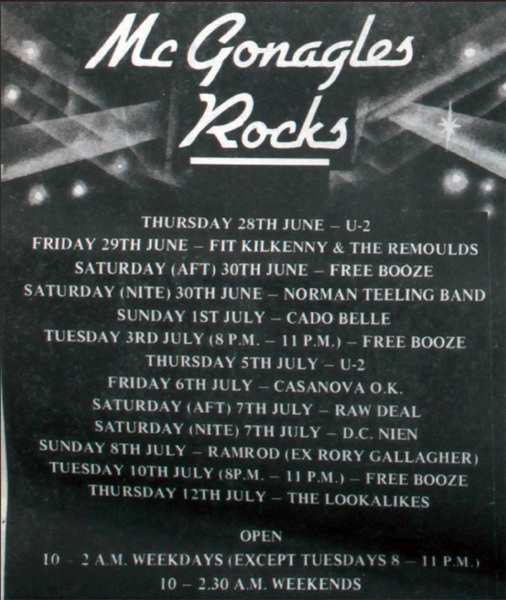 share
Songs Of Innocence is inspired by the band's earliest days in Dublin – the gigs they went to, the places they hung out in, the friends they made.

That story of U2's emergence in the late 1970's  is nowhere captured better than in North Side Story, the special Hot Press publication for U2.com subscribers.

Here's some of the ways in which Songs of Innocence and North Side Story are a perfect combination.

1. Playing Ramones songs to the music press.
'After the Ramones', writes Bono, in the sleeve notes to Songs of Innocence, 'I could try and be myself as a singer.' Seeing Joey Ramone sing ('like a girl') had inspired the U2 frontman to find his own style, but when influential Hot Press staffer Bill Graham came to a band rehearsal in the earliest days, it's fair to say they weren't entirely being themselves. Paul McGuinness recalls the incident in North Side Story.
'They played some songs which Bill immediately spotted were Ramones songs, which was a bit embarrassing,' he recalls. 'But he was impressed all the same. It is well documented that it was Bill who subsequently introduced me to the band and told me that I was going to manage them.'

2. Within spitting distance of the Stranglers
'We were in love with the punk rock scene', as it says in the SOI sleeve notes. The teenage band members were in the house to see the Ramones and the Clash in Dublin during those formative years, and 'The Miracle' and 'This is Where You Can Reach Me Now' (see below) pay homage to Joey Ramone and Joe Strummer respectively.
But in October '78, the band grabbed the chance to play their own part in the emerging scene, scoring a  prized support slot for The Stranglers, at the Top Hat, Dun Laoghaire. Larry had been visiting (promoter) Pat Egan's record shop in Duke Street, drumming home the message that U2 were worthy of a bigger stage. 'He was a very polite as well as a very persistent young fella,' recalls Egan in North Side Story. 'So when The Stranglers' people told me they weren't bringing a support act with them I thought, 'Okay, I'll give these U2 guys a go.'
Turns out The Stranglers were late for their sound-check, so U2 didn't get one. Edge's guitar kept cutting out, and the 1,800 Stranglers fans didn't just hurl spit but lit cigarettes at the band. Rumours were, too, that U2 had upset the headliners by stealing beer from their dressing room. Yet still, the Hot Press review - which you can read in North Side Story - was kind: 'They won't look back at it as one of their most satisfactory sets... but the gig was a giant step. Given the circumstances, they've acquitted themselves with pride.'

3. Complete Surrender
'I can vividly remember when I first saw the Clash,' recalls Edge. 'It was in Dublin in October 1977 at a 1200 capacity venue at Trinity College. It had a massive impact around here. This wasn't just entertainment. It was a life-and-death thing. They made it possible for us to take our band seriously. They showed us what you needed. And it was all about heart.' As 'This Is Where You Can Reach Me Now' puts it, 'We signed our lives away/Complete surrender...'

4. Ireland in the 1970s, a tough place to grow up in.
'It was a war zone in my teens,' sings Bono on Cedarwood Road and lifelong friend, Gavin Friday, 'who lived at the top of the road', concurs. 'It felt like this wasteland,' he recalls, in North Side Story. 'The way I remember it, there was incredible violence everywhere in Dublin at the time. The amount of beatings I got was incredible, even going down to the bus...'
He remembers going to see U2 at the Baggot Inn, Dublin, when 'this crowd that called themselves the Black Catholics came and started throwing stuff at the stage. I think Bono jumped down and went for them ... It was always Bono and Guggi that defended me.' Cedarwood Road itself was 'full of people I still admire and love', Bono writes in the sleevenotes. 'Like Gavin Friday.'

5. 'All of us are wondering why we're here...
...In the crystal ballroom underneath the chandelier.'  The map 'North And South Of The River:Wandering In U2's Dublin', published with North Side Story,  carries dozens of notable landmarks, including the location of McGonagles in South Anne Street, originally known as The Crystal Ballroom. A generation of people went to dance there, including Bono's parents. 'The song, 'The Crystal Ballroom', is me imagining I'm on the stage of McGonagles with this new band I'm in called U2 – and we did play a lot of our important early gigs there - and I look out into the audience and I see my mother and father dancing romantically together to U2 on the stage.'

6. The cover star of Boy was also one of the neighbours
Just along the way from the Hewsons on Cedarwood Road lived the Rowens. 'That family were like an Old Testament tribe,' Bono writes in the sleeve notes. 'I learned a lot from them.' His close friend Derek Rowen - aka Guggi - was one of the clan (see below). But one of the younger Rowen siblings, Peter,  also came to  prominence in U2 iconography - being photographed, as a five-year-old, for the cover of Boy, and later War, and appearing in the video for Two Hearts Beat as One.
'Bono was over in our house quite a lot,' Peter remembers in North Side Story. 'I was only a little kid, but one of my older brothers said he used to eat us out of jam sandwiches. His mum died when he was quite young, so his own house was often empty and he'd come around for a bit of company.'

7. Early artistic influences on Cedarwood Road
Guggi has been friend and confidente throughout U2's career. 'I painted with Bono from childhood,' he reminisces, in North Side Story. 'His Dad set up a couple of little tables for us in the garage of the semi-detached house on Cedarwood Road, where he lived, and we would go out to the garage and draw and paint. Bono's dad, who himself was a painter, would give us critique and watch our progress.'
Guggi went on to become, in the words of Hot Press Editor Niall Stokes, 'one of the most successful artists of the modern generation in Ireland.'
'While the atmosphere of stagnation in Dublin was profound for boys growing into, and becoming, young men, underneath all that, currents of far-reaching change were swirling,' Stokes remembers. 'Gradually clawing their way out of the anonymity of their North side suburban upbringing, U2 and their cohorts would in many respects come to embody what that change was all about.'
Painting remained an important part of the artistic relationship for the former Cedarwood Road residents. 'Later on, during the making of the Joshua Tree,' writes Guggi, 'the band had this huge house in the Dublin hills with lots of spare rooms where they had set their studio up, and Bono asked myself and Gav [Friday] whether we would go there and paint, and we did. The three of us had painted on a Wednesday night for a number of years.'

8. Stronger than Fear
Another of the Rowen clan, Andy ('Guck Pants Delaney, we used to call him,' writes Bono in the sleeve notes) inspired the song Raised By Wolves. He was in Talbot Street, locked in his dad's van, on May 17th 1974 when a bomb went off, killing 33 people. As the lyric goes: 'I'm in a white van as a red sea covers the ground.'
Introducing the book, Niall Stokes describes how the artistic and cultural ferment in 1970's Dublin played a crucial role in helping young people counter both the social deprivation and the political troubles. 'The sectarianism and isolationism which gripped the country for... 50 years had a shockingly negative, repressive effect,' he says. Yet at this pivotal moment in the city's history, 'a less conventional breed of artists and activists - painters, poets, playwrights, actors and musicians gathered [at haunts such as the Project Arts Centre] in a spirit of experimentation and adventure.'

9. Blood orange sunset brings you to your knees.
The sleeve notes again: 'LA seemed like the polar opposite of Dublin. We love being somewhere between extremes. I remember Edge, Larry, Adam and me getting off a plane in California and looking at each other like 'This is better than the movies' and that was just the airport!'
It was the spring of 1981, when U2 landed in California for their first ever gig in LA. And Charlie McNally,  Dublin exile living in LA, was on hand to watch the band launch their US invasion, and report back for Hot Press. The band played the Country Club, he reported, 'the most prestigious venue in Los Angeles' and  'the showcase gig in LA of everyone from local hot shots Naughty Sweeties to Ry Cooder.' U2 'took the place by storm.'
A young Paul Hewson had asked McNally two years earlier if U2 could play support 'for nothin'' to his own band, at the Stardust [nightclub] in Artane. 'Little did I think that only two years later I'd witness that same band playin' their asses off in Sunny Califonria,' wrote McNally. 'Tonight, I had the pleasure of observing a tiny paragraph in Irish rock music history - U2's debut in LA.'

To get your own copy of North Side Story, take a look at a U2.com Subscription.

Features, North Side Story, Other, Songs Of Innocence
U2
©2020 U2.  Powered by Live Nation Entertainment.