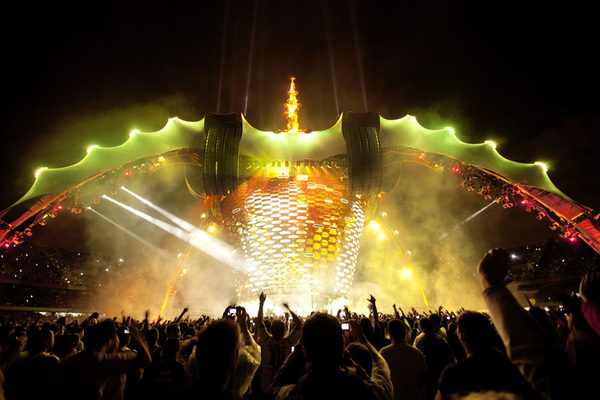 share
The heavens opened and drenched everyone ahead of the band taking the stage for the second night in Sao Paulo but this turned out to be a memorable night for all kinds of other reasons.
'Real Thing' opened the show and then, 'for special reasons, this is our first single' announced Bono as  the band broke into a surprise that  sounded as fresh and fierce as the day of its release in 1979.
'I had the feeling it was out of control
I was of the opinion it was out of control....'

Rain, what rain? 'Boots', Magnificent, Mysterious Ways, Elevation, the joint was jumping at Estadio Morumbi, it was well out of control.
'Mucho obrigado, Thank you to Muse,' said Bono. 'Extraordinarily talented musicians.'
'Nos amamos o Brazil... We love you... but you know that don't you?'

Still, everybody needs reassurance, so it was a good moment to make sure, he explained.
'Edge is a very insecure guy and asked me to check that you don't love other bands the way that you love us...'
The general ovation that followed suggested there wasn't too much to be concerned about, but still, as Bono continued, 'You've had other lovers passing through - Oasis, Coldplay, now Muse - so  Edge needs to know how much you love him.'
Brazil confirmed its undying love in the loudest possible terms. Tonight, in case of any doubt, Bono also confirmed it was  Larry Mullen on drums and Adam Clayton on bass guitar.
'And if I wasn't insecure I wouldn't have become a singer - my name is Bono.
We try to serve you. We salute you...'

Special thanks went out to Governor Alckmin for the loan of Sao Paulo. 'No work tomorrow, is that right? U2 day. Its official! Alright new song, this is North Star.'

Beautiful Day segued into an stadium-wide sing-a-long of Singing in the Rain before Vertigo turned the stadium into clubland again. And then, out of nowhere, after Miss Sarajevo, a total surprise, the return of Zooropa, which hasn't been played live since the year it was released way back in another century.
'Zooropa... a bluer kind of white
Zooropa... it could be yours tonight.'

You know a track is making a little bit of musical history when it starts trending on Twitter which Zooropa did tonight - amazing moment for Brazilian U2 fans.

'Don't know what to say to you,' exlaims Bono after 'Streets. 'What an unforgettable night. We will never forget this night. Good looking people!'

And with another special dedication of 'Moment of Surrender' to those in sorrow, 'mothers and fathers without children',  after Thursday's events in Rio, the second show in Sao Paulo comes to a close.

Were you at Estadio Morumbi tonight? What was it like when Zooropa was played? What was your highlight ? Drop us a review and post a photo on our Tours Page.