17 Feb 2009
share
Get On Your Boots is officially released. Links here to download the single. In the UK you can even buy it on 7". 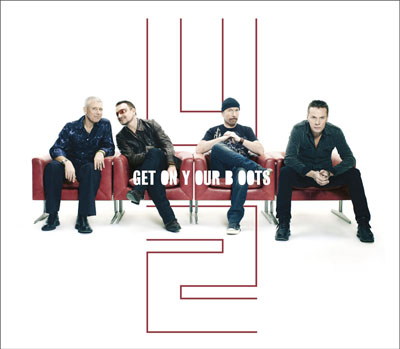 Buy from iTunes in the UK

From iTunes in Ireland

From iTunes in the USA

And if you're in the UK and fancy owning the 7" vinyl - the record company are giving away 4,000 7" Single Collector's Edition Boxes. You have to enter by tomorrow. Sign up here. Incidentally, the CD and 7" single feature the exclusive b-side No Line On The Horizon 2. Tracklisting and credits:
1. Get On Your Boots - Brian Eno, U2, Daniel Lanois, Declan Gaffney, Richard Rainey, Carl Glanville, Terry Lawless, Sam O'Sullivan
2. No Line On The Horizon - U2, will.i.am, Cenzo Townshend, Brian Eno, Declan Gaffney, Tom Hough, Neil Comber

'Boots' is the first single from U2's new album 'No Line on the Horizon' which is produced by Brian Eno, Danny Lanois and Steve Lillywhite.

Released on March 2nd (March 3rd in the US), the album will come in a standard format with 24 page booklet and in digipak format. The digipak includes an extended booklet and the album's companion film 'Linear' by Anton Corbijn. A limited edition 64 page magazine will also be available, featuring the band in conversation with artist Catherine Owens, and new Anton Corbijn photographs. No Line On The Horizon will be released on 180gm vinyl. (More on the formats below)

Highlights, Singles, No Line On The Horizon
©2022 U2.  Powered by Live Nation Entertainment.