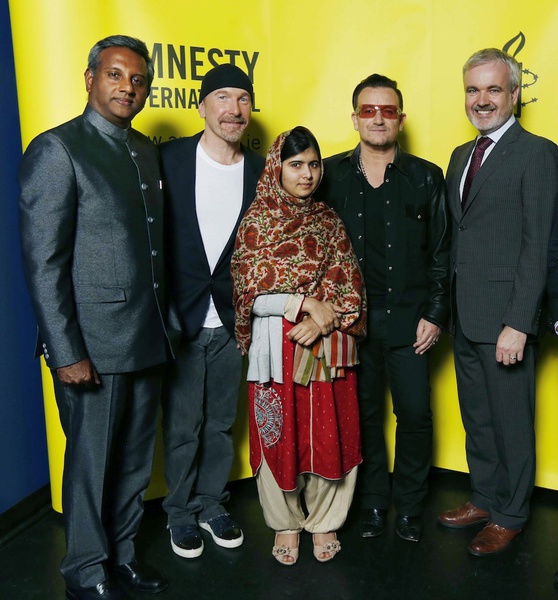 Malala, 16, is an advocate for equal access to education. Her 2009 diary for the BBC detailed her frustrations with the Taliban's edict to shut down all girls' schools in her native Pakistan.  In 2012 she was shot and severely wounded in an attack claimed by the Pakistani Taliban.

After the presentation from Bono, accompanied by Azar Nafisi, author of 'Reading Lolita in Tehran' she said: 'I am truly honoured to receive this award and would like to take the opportunity to remind everyone that there are many millions of children like me across the world who fight every single day for their right to go to school. I hope that by working together we will one day realise our dream of education for every child, in every corner of the world.'

Harry Belafonte, who has  dedicated his life to humanitarian causes, spanning the civil rights movement to the plight of children caught in Syria's armed conflict, was presented with his Award by Roger Waters. He said, 'Since its birth, I have been devoted to the principles for which Amnesty International stands. It is an honour to receive the recognition being bestowed. Amnesty International's stand on any universal abuse to human rights has been courageous and is our moral compass.

'I am especially honoured to receive the Ambassador of Conscience Award because I am having the distinction of sharing this with Malala Yousafzai, a true hero of our time. My admiration for her is unending. She has awakened many in the global family to a commitment in struggle against tyranny. For all this I remain eternally grateful.'

The Ambassador of Conscience Award is Amnesty International's highest honour, recognizing individuals who have promoted and enhanced the cause of human rights through their life and by example.

'Our two new Ambassadors of Conscience are different from each other in many ways, but they share a dedication to the fight for human rights everywhere and for all,' said Salil Shetty, Secretary General of Amnesty International. 'Harry and Malala are truly Ambassadors of Conscience, speaking up for universal rights, justice and human dignity and inspiring others to follow their example.'

The Ambassador of Conscience Award was inspired by the poem From the Republic of Conscience, written for Amnesty International by the late Seamus Heaney. The Irish poet had been due to read the poem tonight. Instead it was read in tribute to him, a poem that has inspired a generation of human rights activists.