On TikTok? From today you'll find U2 there too.

TikTok creators will be able to use the band's tracks in their video creations, including, from Wednesday, a brand new song 'Your Song Saved My Life'.

The new track, from the SING 2 Original Motion Picture Soundtrack, is previewed from today on TikTok, two days before its official release this Wednesday, 3rd November.

Other sounds available in the TikTok library from today include 'Beautiful Day', 'With Or Without You', 'Vertigo', 'Sweetest Thing', 'One', and 'Where The Streets Have No Name'.

The band's official channel is live at @U2 and their first video, in celebration of ‘Your Song Saved My Life', features artwork by Bono.

As November also marks the 30th anniversary of 'Achtung Baby', TikTok users can expect unearthed archival footage from the band performances over the decades.

Follow U2 on TikTok here and check out their catalogue on the TikTok Sounds Page. Fans can also access a selection of the band's newly-arrived tracks in the 'Greatest Hits' Guest Playlist.

New to TikTok? Getting involved couldn't be easier, simply download TikTok for free via the Apple App Store, Google Play or Amazon.

Comments
4
You must be a logged-in member to add comments.
SIGN IN / SIGN UP
YankeeManc
09 November, 2021
Non-TikTok Users?
I hope the content shared on TikTok will be available for subscribed fans elsewhere. I don't use TikTok.
garyquintana
03 November, 2021
Garyquintana
It's just a soundtrack folks. Its felt with the movie. We know we'll get electrified a little later.
cgmorgan777
02 November, 2021
That’s what I’m talking about!
I don’t care if it’s been around for a year or not, I’m looking forward to this new U2 song!!
carriemunky
02 November, 2021
Get Rocking
Cmon lads this sounds a bit too laid back. We need some real Rock n Roll from Larry, Adam & the Edge. 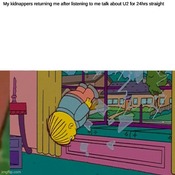