'Your Song Saved My Life' 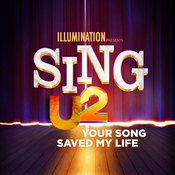 Sing it from the rooftops - there's a brand-new track from U2 landing today!

Some might say it's a life-saver - certainly, it's the first new music since 2019, and you can listen to 'Your Song Saved My Life' by U2 here and now.

The band wrote it for the eagerly anticipated movie Sing 2, which premieres in the US on December 22, and features Bono making his animated film debut as the (ahem) reluctant and reclusive rock-legend lion, Clay Calloway.

"It's just full of so much emotion and heart," the film's director Garth Jennings has said about the song (to Entertainment Weekly).

The film itself is packed with 40 classic and contemporary tracks, and celebrates the power of music to heal - something Bono gave voice to last year in his birthday list of 'songs that saved my life'.

Meanwhile, the film's official soundtrack - complete with U2's new song - is set for release on December 17. It includes a version of 'I Still Haven't Found What I'm Looking For' sung by Scarlett Johansson and Bono, as well as 'Stuck in a Moment You Can't Get Out Of' (Johansson), and 'Where the Streets Have No Name' (in which Johansson is joined by fellow cast members Reese Witherspoon, Nick Kroll and Taron Egerton).

There are 21 tracks in all on the 'Original Motion Picture Soundtrack', featuring the likes of Halsey, Elton John, Billie Eilish and Pharrell Williams.

U2 are no strangers, of course, to making music for film, and have previously had two songs nominated for Academy Awards (for 'The Hands that Built America' and 'Ordinary Love').

Remember, you can listen to 'Your Song Saved My Life' here. And you can pre-order/pre-save the Sing 2 Original Motion Picture Soundtrack here.

All of which, we hope, is enough to put a spring in your step, this November - and a brand new song in your heart!

Comments
28
You must be a logged-in member to add comments.
SIGN IN / SIGN UP
Billy8B
03 December, 2021
A great song
And sure it will sound even better in the context of the movie, Again shows versatility of this great band.
aristonEschaton
22 November, 2021
Brilliant, and distictively U2
I heard this for the first time 2 weeks (!) after it was released - when it came on the radio i didnt know it was u2 - and straight away i thought this sounded like U2 (strange that, eh?), but it immediately sounded different to the rest of the song songs on the radio. Same sort of direction as Window In The Skies, Love Is Bigger, Lights Of Home (St Peter Version) .. wonder if this is a hint for the next album direction too?
S French (Roko)
16 November, 2021
Another beautiful song
A beautiful song. Love hearing new material. For others leaving comments, remember U2 have a large and varied choice of songs, something for everyone. I love the variety. This song reminds me of Peace on Earth from ATYCLB, a gentle song. This new song is well written and sung amazingly! Bono you are amazing! Rock on U2!!!
bukakkee
15 November, 2021
Your song saved my life
Very thin. Not sure why they bother with movie soundtracks. They are just not great songs worthy of the bands time. Please strip it down and do a tour of songs from Boy to Unforgettable fire, concentrating on October and Unforgettable Fire, your two best albums, Get back to being the raw, garage band that you are!
acrobat_73
15 November, 2021
Yep
Not my cup of tea, I guess 30 years ago Bono would not have foreseen this. Instead they were baldly reinventing their sound. Achtung!
dvdlucs
13 November, 2021
So disappointed
Keep hoping that the band will get back to there roots and play some rock and roll, but sadly they keep taking the path that Phil Collins took, Im a huge fan of the early stuff, but this has me totally lost.
CuzV
10 November, 2021
Not Great, Not Awful.
“Very good is the enemy of great…” - Bono
Jetske
07 November, 2021
Jet
Niet mijn U2 song. Voor een film ala. We wachten op beter werk.
CaritoCarito
06 November, 2021
Very good
Very good song!
SARDE
05 November, 2021
So True!
Bono must here this phrase “your song saved my life” all the time. I love that he made a song based on this truth. I love the lyrics and music of this new song. Many U2 songs must have saved many people’s lives and like the song says “I listen to them to survive”It’s Beautiful Day for me. Keep it boys.
Ramesh Paramjothy
05 November, 2021
Tour please
Great to hear, fantastic video. Come on guys we all need to see you 4 on live tour. Please make us (there is no them) so happy
gerryballymun
05 November, 2021
New song
It's not the best
musicabona
05 November, 2021
Sweetness and power
I'm so happy to hear a new song from U2! It's a lovely soundtrack for this animated movie. After a beautiful piano intro Bono's voice sounds amazing. His melodies touch our hearts with a lot of passion and soul, expressing much love for music and what a song can mean to us. "I sing it to survive" is one of the most moving lines that reflect the positive energy of music and our need for it. This piece ist both tender and powerful, with catchy melodies making a great contribution to the film.
englishsid
05 November, 2021
Physical release?
I miss physical releases, adding a cd or 7" inch single to my collection.
oliverdoherty
04 November, 2021
Ollydoc
Unfortunately I think this song is bland possibly it is written purposely to fit the role in upcoming movie. I think its time to dream it all up again...if they can one last time....maybe explore the Rick Rubin option or revisit the rawness of the first 4 albums and strip their sound back to recreate that energy. The joshua tree through to Pop is pure gold and is untouchable...it would be great to do one last classic rockin album with lillywhite or Lanois and Eno...
Marcy
04 November, 2021
Lion Love
What a fitting moment for this song to arrive... as we consider how U2 music has saved so many of our lives, so many times over. As my daughter saved my own life, my 7 year old Julie Grace wouldn't be here at all if it weren't for the music of U2. And it feels to me like this song is for her. Thank you. So much love and many blessings to U2 and all of the U2 fan family. Love, Marcy

soey
04 November, 2021
you made me cry...
...in the morning. What a way to start a day. So heartbreaking and healing. Thank you so much! Your song/s saved my life.
DiegoCorrea
04 November, 2021
Fantastic
When a new album!!!!! Please
sazshackle
04 November, 2021
Your Song Saved My Life
Just lovely, bought a smile to my face, got a really warm feeling inside after hearing it. Good to have you back U2!
verstraete
04 November, 2021
too long....
I miss you when you're not around... I'm so looking forward to seeing you and the U2's fans again.. But I'm so mappy to hear your voice ..... Hope to see you at NICE for another amasing show... kisses for the U2's fans hope to see you soon ..... from the south of France
u2freak74
03 November, 2021
Those lyrics....
Such a beautiful soundtrack for the animated movie Sing2!!! And B´Mans voice is stunning....as usual!!! And those lyrics - mind-blowing!!!!!!!!
Crooky
03 November, 2021
Like it but ...
It's nice, like the vocal and it's musically kind of what you'd expect for a soundtrack to a cartoon animal film that kids will see - simple and catchy. The words subvert that a bit. But with guitar music having a new life at the moment I hope the next album will be very different to this track and will have some high energy songs and be forward-looking. In the meantime, this as 'U2's new single' isn't ideal: People who'd like to see them fail will just say it shows they're past their best.
Lost Sailor
03 November, 2021
Thank You!
Bono, Edge, Adam, Larry thank you for gifting us with a wonderful ballad as 2021 gets ready to close! There is a serene peace that comes with this gorgeous melody. As I have posted and mentioned before, and had the privilege to tell you in person, YOUR Songs Have Saved A Lot Of Our Lives. Thank You Again!
luca_I
03 November, 2021
Still on the road
Not a masterpiece but a good song for a movie. Hope.to see you soon with a new album e a new tour, guys. Ciao from Italy!
febottini
03 November, 2021
You're back! ❤
I love the song! It's so beautiful and sweet. I can't wait to watch the film. I'm very happy you're back!! Love from Brazil.
Stesson
03 November, 2021
Great song
Nice tune boys. Looking forward to the movie and hearing the new versions of older U2 songs.
RainerHopefullyHoffer_1973
03 November, 2021
nice song
The B-Man‘s voice in best conditions. Two weeks to the 30th announcement of AB. We dream of ZOOTVreloaded 2023…!

cristiu2
03 November, 2021
Not my cup of tea...
I'm somewhat disappointed after hearing this song. It's a decent song, but the U2-sound has left. Could have been a Bono-solo single. And yes, it's for a big family movie, it fits with this. I hope the new album will be miles away with this direction.
Newer comments    1 - 28 of 28    Older comments